Snitzel's Russian Revolution introduced to breeders at A$55,000 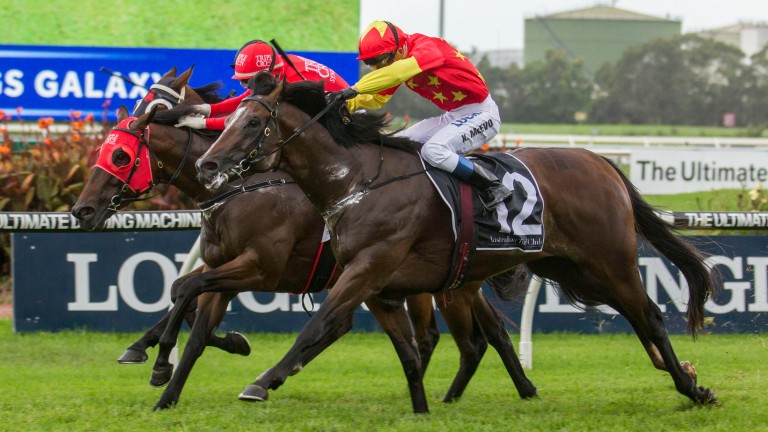 Russian Revolution (2) on his way to winning The Galaxy at Rosehill this year
Sportpix
1 of 1
By Lydia Symonds UPDATED 8:14PM, APR 11 2018

Newgate Farm has announced dual Group 1 winner Russian Revolution, arguably the best son of champion sire Snitzel to go to stud, will stand for an introductory fee of A$55,000 in 2018.

The Galaxy and Oakleigh Plate winner is the latest addition to the 13-strong Newgate Farm stallion roster, with the former Peter and Paul Snowden-trained entire retired after his Caulfield Group 1 success in February.

He joins Golden Slipper Stakes winner Capitalist, who covered 229 mares in his first season at stud in 2017, as the equal highest-priced stallion on the Hunter Valley-based farm's roster.

Russian Revolution, who was a A$320,000 Inglis Australian Easter Yearling Sale purchase in 2015 by China Horse Club and Michael Wallace Bloodstock, won his first start at Canterbury in June as a two-year-old before going on to win his next three starts including wins in the Vain Stakes and the Roman Consul Stakes.

"We are very appreciative of the interest our blindingly fast and super handsome son of Snitzel has received from breeders since his retirement from racing was announced," Newgate Farm general manager Bruce Slade said.

"Now that his fee has been set we can work with breeders to craft his first book which we expect to be of unprecedented quality."

Stakes-winning sprinter Winning Rupert, who also started his stud career in 2017, has also had his fee reduced to A$16,500.

Slade said since the establishment of Newgate Farm it had maintained service fees at a competitive rate to support breeders.

"The remainder of our roster is a group of the most promising young stallion prospects in the country," he said.

"There are no doubt top future sires amongst them and the opportunity is now there for breeders to make real money on future rising service fees.

"We would encourage breeders to take note of the information on them all out in the market place already, including early race results and auction results and breed accordingly.

"This year is a game changer for many breeders who will support Newgate stallions and as always our team will be there assisting breeders, from the start of the commercial mating process, through the sales and onto the racetrack."

FIRST PUBLISHED 5:39PM, APR 11 2018
We are very appreciative of the interest our blindingly fast and super handsome son of Snitzel has received from breeders since his retirement