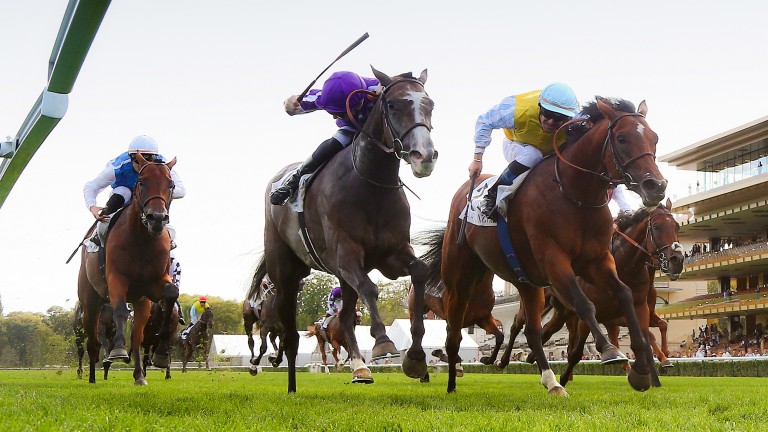 Recoletos (right) sticks his neck out to land his second Group 1 in the Prix du Moulin
Scoopdyga
1 of 1
By James Thomas UPDATED 6:06PM, SEP 9 2018

Recoletos, one of three elite performers by former Ballylinch Stud resident Whipper, landed his second Group 1 prize on Sunday when getting up in the dying strides to deny Winds Chimes in the Prix du Moulin de Longchamp.

Recoletos made fairly light work of breaking his Group 1 duck in the Prix d'Ispahan earlier in the year, but on this occasion he needed to snatch victory from the jaws of defeat, with the three-year-old Wind Chimes having got first run.

The result deepens the impact the great Miesque has had on the 2018 season, with the four-year-old the third descendant of the Niarchos's mighty mare to land a French Group 1 this year, following on from Prix du Jockey Club winner Study Of Man and Alpha Centauri, who denied none other than Recoletos to win the Prix Jacques le Marois last month.

Recoletos descends from Miesque through his sire Whipper, a son of Miesque's Son who in turn is by Mr Prospector and out of the great broodmare, who not only produced Classic winners Kingmambo and East Of The Moon with her first two foals, but also supplied stakes scorers Moon Is Up and Mingun.

Moreover, her brilliance was not confined to the breeding shed, as she retired with ten Group/Grade 1 victories to her name, including wins in the 1,000 Guineas, Poule d'Essai des Pouliches and two renewals each of the Prix Jacques le Marois and Breeders' Cup Mile. 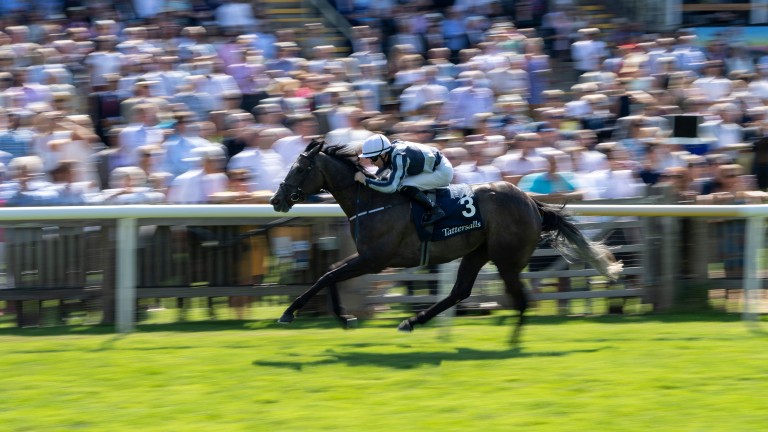 Alpha Centauri wins the Falmouth Stakes
Edward Whitaker
With Alpha Centauri due to contest next week's Matron Stakes, Miesque's influence could well come to the fore again this season.

Recoletos, bred and owned by Darpat France, is the sixth foal out of Highphar, an unraced daughter of Highest Honor. Her brood have been in fine form this year, with Recoletos's year-younger half-sister Castellar, a daughter of American Post, landing the Prix de la Nonette last month.

Highphar is out of Pharatta, winner of the Grade 2 Breeders' Cup Handicap in 1998 and a half-sister to Group 2-winning Crimson Tide.

Since producing Recoletos and Castellar, Highphar has delivered Villalar, a full-sister to Sunday's Group 1 winner who is also in training with Carlos Laffon-Parais, and has a filly foal by leading German stallion Adlerflug.

Whipper's other top-flight winners are the flying filly Wizz Kid, who defeated Mayson to land the 2012 Prix de l'Abbaye, and Waikika, who won the 2016 Premio Vittorio di Capua in Italy.

Having landed three Group 1s, namely the Prix Morny, Prix Jacques Le Marois and Prix Maurice de Gheest during his racing days, Whipper began life on covering duty at Ballylinch Stud in 2006, from where Wizz Kid and Waikika were conceived.

In 2011 he switched to Haras du Mezeray, where he spent five seasons. The 17-year-old now stands at Pierrick Pouzol's Haras de Treban, where he was advertised at a fee of €3,800 for the most recent covering season.

FIRST PUBLISHED 5:51PM, SEP 9 2018
Recoletos descends from Miesque through his sire Whipper, a son of Miesque's Son who in turn is by Mr Prospector and out of the great broodmare