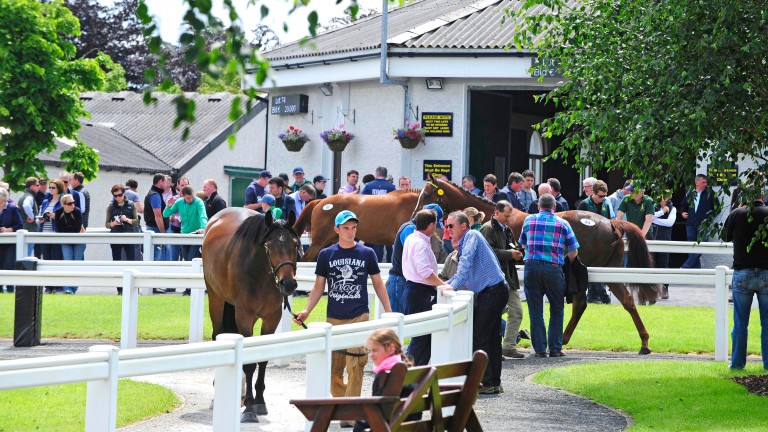 For the fifth consecutive year Tattersalls Ireland recorded another increase in turnover as it posted a three per cent rise to €45,046,050 for 2016.

The company’s flagship auction, the Derby Sale, had a record 32 horses selling for €100,000 or more and was topped by a three-year-old son of Saddler Maker bought by Harold Kirk and Willie Mullins for €255,000.

It was another strong year for the September Yearling Sale, which recorded increases in all areas as well as producing a clearance rate of 83 per cent.

The company's managing director Roger Casey said: “For the fifth consecutive year, Tattersalls Ireland has delivered an increased set of returns with the aggregate, the fourth highest on record, increasing by three per cent.

“Similar to 2015, the modest increase in turnover is a reflection on the consolidation of the bloodstock industry as a whole. The market continues to dictate the demand for the more select types and this is certainly reflected in the annual rise in aggregate.

“Trade at the November National Hunt Sale was also very strong. It was extremely pleasing to observe the significant growth in the foal section recording a robust clearance rate of 71 per cent and 37 foals realising €40,000 or more.”

Sales at Tattersalls Ireland Cheltenham witnessed an eight per cent rise in turnover to £13,820,100 thanks to the recent record price for the four-year-old point-to-pointer Cool Getaway, bought by Mags O’Toole for £305,000 earlier this month.

Over the course of the year, 258 lots changed hands from 313 offered for a clearance rate of 72 per cent at the Prestbury Park venue.

The breeze-up sale also had a significant jump in results with turnover rising by 120 per cent, the average recording a 38 per cent rise and the median stood at 100 per cent.

Casey added: “Sales at Ascot for 2016 concluded on a high after the first full year under the Tattersalls Ireland umbrella. Undoubtedly the standout success story of the venue is the February Sale graduate Mrs Danvers - available to the market at £1,000, she went unbeaten through the year and won twice at Pattern level including the Cornwallis Stakes at Newmarket.

“A total of 33 horses fetched £100,000 or more at Cheltenham, which is a resounding endorsement of the venue as the venue of choice to sell quality form horses.

“We would like to sincerely thank all our customers, vendors and purchasers alike. With their loyal support 2016 has proven to be a remarkable and rewarding year for Tattersalls Ireland across all three sales venues. We would also like to extend our gratitude to the team at Irish Thoroughbred Marketing for their continued support and assistance throughout the year.

“On a personal level, I would like to thank our own industrious team at Tattersalls Ireland and the wider Tattersalls family. To maintain the continued growth of the company in recent years and to successfully deliver sales at two new venues has required unstinting effort and commitment and our team has not been found wanting in this regard.”