Andreas Jacobs on the perils facing the South African industry 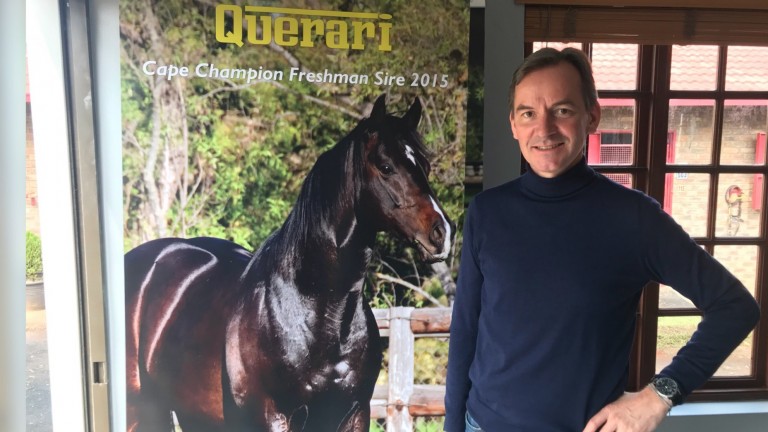 The Jacobs family are among the leading owner-breeders in Europe having raced four Deutsches Derby winners as Gestut Fahrhof in Germany and are also custodians of Enable's sire Nathaniel and golden goose Shastye at Newsells Park Stud in Britain.

But they have also come to dominate the breeding landscape in South Africa, where Dr Andreas Jacobs acquired Maine Chance Farms in 2002.

Jacobs is acutely aware of the challenges facing the South African industry, particularly the need to renegotiate the direct trade of horses between the country and the European Union (EU), which could open up direct trade between South Africa and other non-EU countries.

"Trade always means moving horses in two directions, it's not one-sided," he says. "Both continents and countries benefit hugely from exchanging bloodlines.

"Since coming to South Africa, I have brought about 60 to 80 European mares here, to bring fresh blood and quality to the mare band. I've also brought four or five stallions to improve and diversify the gene pool, which has always been the biggest driver for me.

"I think that was very beneficial for the industry here. The fact this country can breed tough horses has been proven in Dubai and Hong Kong, with South African breds winning big races in those two destinations."

Jacobs pulls no punches in his assessment of yearling trade in South Africa and harbours concerns that the country could suffer if quarantine measures, which were introduced following an EU audit in 2013, are not relaxed between South Africa and other nations.

"There's a very strong top end mainly driven by international buyers who come in with international currencies," he says. "The local, national market is down significantly.

"If you look at the median on day one of the National Yearling Sale, it was minus 23 per cent, showing breeders are under huge pressure.

"If this market is going to open, it will help significantly, but if it doesn't open, the whole country and the racing industry here will be in trouble. I fear we'll see further significant cuts in numbers of mares, foals and racehorses.

"The foal crop dropped around 20 per cent between 2016 and 2018. If that goes on, you come to an isolated island industry which will not survive because the race regime is not sufficient to cover what's needed to have a race for each horse."

But with breeders struggling to sell youngstock by less fashionable sires at the two flagship yearling sales in South Africa, that presents an opportunity for buyers looking to source the next star.

"The Cape Premier Yearling Sale and the Bloodstock South Africa National Yearling Sale are of an excellent quality and the way the yearlings are prepared is excellent," adds Jacobs.

"The big buyers are sourcing stock from both sales nowadays and that mightn't have been the case in the past. The country feels much more united again."

Jacobs has thrown his considerable backing behind the South African industry, and one of his first moves was to import dual Group 1 winner Silvano, a homebred son of his family's British-bred stallion Lomitas.

In fact, winning at the highest level is a prerequisite for any stallion deemed worthy enough to stand under the black and yellow umbrella of Newsells, Fahrhof and Maine Chance, all three of which are commercial operations with stallions and broodmare bands numbering between 60 and 100.

Silvano has been crowned champion sire three times in South Africa, and is also the sire of the most expensive thoroughbred ever sold in the country, when a brother to Grade 1 winner Nightingale was purchased by Mike de Kock on behalf of Shadwell for R9 million (£482,000 / €558,000) at this year's Bloodstock South Africa National Yearling Sale.

"Silvano was the first stallion I brought here and is so far a three-time champion sire," says Jacobs, sitting in the conservatory at the end of the barn where the Maine Chance yearlings are housed during the Johannesburg auction.

"He was a German-bred, by an English horse in Lomitas out of an American horse, so very diverse. He fitted this country perfectly, is suitable for all mares, and could be a role model for many other stallions to come down here.

"He came out with a R9 million yearling record. The fact that Mike de Kock, the trainer of most of his offspring, and Hong Kong interests were bidding on a horse like him to R9 million shows that he is a truly internationally recognised horse. The fact he produced over 20 individual Group 1 winners in Europe and South Africa underlines this.

"I hope international breeders will look at South African stallions to be tough, to be internationally recognised, and Silvano is not the only one - there are two or three others in the pipeline who will come and follow him."

There's a fair chance Jacobs has already found the successor to Silvano, with the Oasis Dream stallion Querari fourth behind Silvano in the leading sires' table at last week's National Yearling Sale, with 25 lots selling for total receipts of R11.265m.

"Again, Querari is a German-bred horse like Silvano," notes Jacobs. "I brought him here about five or six years ago. He looks like the second imported horse to come through. He brings a toughness from the German mare-line with Oasis Dream speed on top, so he's an interesting blend for this country.

"The good news is they're very hard - we only bring tough horses here who are Group 1 winners in their own countries. That's the condition because training in this country is relatively tough, so the selection process is relatively tough as well. But that means if you buy from a proven sire here, you get a tough horse."

Another to fit the bill as a tough Group 1 winner is Erupt, who entered stud at Maine Chance in 2018 having landed the Grand Prix de Paris at four and the Woodbine International at five, and the locally bred Vercingetorix, a son of Silvano trained by De Kock to win the Daily News 2000 at Greyville and Jebel Hatta at Meydan who is now in his fifth year at Maine Chance.

While the R9m sale-topper was consigned by Wilgerbosdrift Stud, Maine Chance bred and raised a previous national record holder in Standpoint, a Dynasty colt out of Silvano's full-sister Shina who was hammered down for R5.2m at the 2015 Cape Premier Yearling Sale.

Renamed Horizon, he won a Grade 3 at Kenilworth to earn a berth at Hemel 'n Aarde Stud and is among the new recruits to stud in South Africa this year.

Fund set up for the Moutonshoek grooms involved in road collision

'Nick Nugent probably the most colourful auctioneer I've worked with'

FIRST PUBLISHED 12:00PM, MAY 7 2019
If this market is going to open, it will help significantly, but if it doesn't open, the whole country and the racing industry here will be in trouble