Breeder's greatest horse won the King George back in 1994 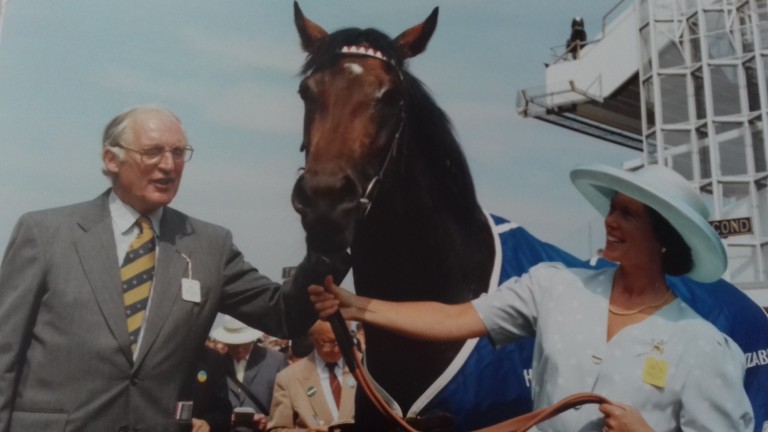 Michael and Carolyn Poland with King's Theatre after his victory at Ascot
1 of 1
By Tom Peacock UPDATED 4:24PM, JUL 29 2019

For a man whose professional and sporting life has been dictated by strict criteria, it seems ironic that Michael Poland’s greatest contribution to bloodstock came about somewhat by chance.

Without King’s Theatre, Poland's homebred who won the King George VI and Queen Elizabeth Stakes a quarter of a century ago, there would have been no Cue Card, Colin Tizzard's horse of a lifetime, no Captain Chris, Menorah, The New One nor any of the names that have made the son of Sadler's Wells one of the most important and successful stallions of the modern era.

Poland, son of a gentleman farmer and high-flyer at Lloyd's of London, followed a similar path into the insurance business but his first love was hunting and, specifically, the breeding of foxhounds. It was only when he decided, in his early 50s, that he was becoming too old to ride with the Isle of Wight, and had been introduced to racing by his second wife Carolyn – whose brother-in-law is trainer Henry Candy – that horses appeared in his field of vision.

"I used to think the Derby was for two-year-olds," he recalls.

"It all started when I was at school, we had a pack of beagles there. When I was about 15 I had worked out all their pedigrees, and my interest started there. Elementary genetics.

"When you’re young, you can go to the top people and ask them questions, and they’d give you answers. I was very bold; I went to all the top people in beagling, the breeders. Likewise when I started breeding foxhounds. When I came into racing, I was still young enough to go to the top people, they would very willingly share their knowledge with me. The whole time I was accumulating knowledge – they wouldn’t do so now because I’m older."

Once captivated by the premise that thoroughbreds could be bred along similar principles, Poland read ceaselessly and picked the brains of everyone he met, from Gerald Leigh and Jim Joel to Seth Hancock and Peter Willett, sage of the modern Pattern.

Inspired partly by agent David Minton, he went to Tattersalls’ December Sale in 1986 with an eye on Joel’s dispersal draft.

"They were good old pedigrees, and I had an overdraft of £20,000 to buy a horse," he recalls. "Only they were going for thousands. One I’d marked out – Photo – was partially blind. I thought people won’t want to buy that. She went for 280,000gns; I shut the catalogue.

"The next one who came in was Regal Beauty. I hadn’t even considered her – she was US-bred, had been barren, no form.

"I briefly looked at the page and reckoned Joel would have spent almost $100,000 on buying her and she’d had a foal by Shirley Heights, who the auctioneer Michael Watt said was exceptional. So I knew people were thinking something of her, and although she was a failure as a racehorse, I learned afterwards that Henry Cecil had recommended to Joel that he breed from her."

Suddenly finding themselves with a horse but not even a headcollar, the Polands took Regal Beauty back to their farm in the Meon Valley where, upon being led out of a cattle truck, she was startled by the sight of some Friesian calves and knocked Carolyn, an accomplished horsewoman, into a water tank.

"It’s fair to say if she had failed in all respects, she would have been put into the kennels as a hunt horse, and that’s a fact," she explains flatly.

Instead, something more remarkable happened. That Shirley Heights foal became High Estate, Cecil’s unbeaten juvenile and Royal Lodge winner while Poland had been encouraged by Joel’s racing manager, Peter Doyle, to send Regal Beauty to Coolmore, as they excelled with difficult mares. 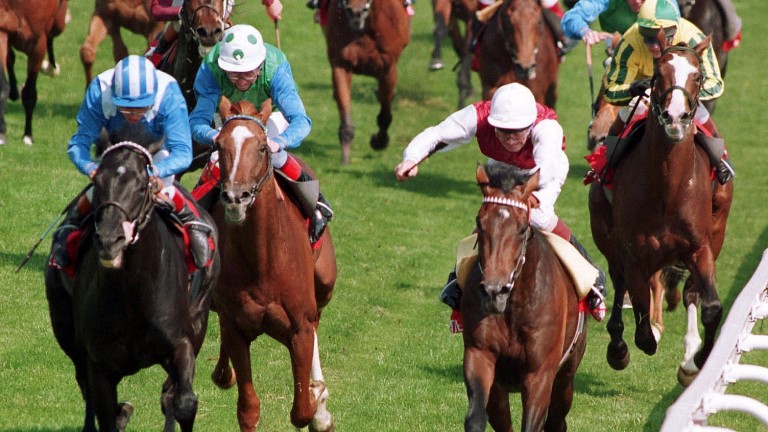 King's Theatre (right) was only beaten by Erhaab in the 1994 Derby
Gerry Cranham
He had her covered by Sadler’s Wells in a foal share which had attracted the interest of Sheikh Mohammed’s advisors, and found himself in joint ownership with one of racing’s most powerful figures once King’s Theatre had appeared on the scene in 1991.

"He was a very, very good foal, I quite expected that Sheikh Mohammed would want to buy him, but we didn’t agree on price so I kept my share," he says.

"One season he was going to run in my colours, one in Sheikh Mohammed’s colours and it was all done by the toss of a coin between Carolyn and Anthony Stroud at Cheltenham. Carolyn lost, they chose the three-year-old colours, and that’s why he raced in ours at two."

The unlikely partners shared the fees and King’s Theatre took the Racing Post Trophy in black, white and red silks and the Craven in maroon and white. Decisions were to be made by Cecil and Sheikh Mohammed and Poland deferred, although he was of such a belief that the colt should run in the Derby despite defeats in the Guineas and Dante Stakes that he sent a sheaf of papers, outlining his case in astonishing factual detail. King’s Theatre was beaten only by Erhaab at Epsom, only by Balanchine in the Irish equivalent, and repelled White Muzzle at Ascot a few weeks later.

For the Polands, who accepted the King George trophy from the Queen with Sheikh Mohammed absent, this was a time which could never be replicated.

Solar and State Crystal, also from a cheaply-bought Joel mare later sold to the Lloyd-Webbers for 500,000gns, had become Group winners too. Feeling that it would be difficult to fund the maintenance of the bloodlines, along with Poland suffering some ill health, the couple essentially retreated from racing aside from an occasional sentimental King’s Theatre jumper and held their own dispersal in 2000.

Not that Poland relinquished the art of breeding entirely. He instead turned his flair to Highland cattle, where his fold has swept the board at national shows and even beat the Queen’s.

"She bought a bull of mine the other day," he laughs.

"We’ve been more successful with the cattle than anything else. But the whole time, since the age of 15 to 82, it’s been a progression."

Although it is a deeply millennial trait to wonder how the world turned before computers, the way in which Michael Poland conducted his mating plans suggests a digital mind operating in an analogue era.

"I’d write out split pedigrees, loose leaf," he explains. "I’d write out maybe 50, 60, 100 stallions’ pedigrees, and if I had a dam, she’d be on the bottom, write that out, then flip over all those and see which looked like suitable crosses."

Poland devoured data of every sort and even made inquiries about sectional times, years before they became more commonplace, but particular in his method was a rule of A, B, C.

"I learned it from a great hound breeder called Sir Newton Ryecroft. You categorised everything, with a hound or a horse. It could be confirmation, balance, soundness, racing record, correctness. A would be above average, B average, C below average. Anything with a C in the pedigree – out, as it’s very easy to breed in rubbish, you can destroy a line.

"My objective always has been to strengthen the female line. If you’ve got a good female line, you send her to a bad stallion, you’ll weaken it.

"I used to reckon I spent over 1,000 hours a year studying pedigrees. I’d look for evidence of soundness; if a mare, and the first two or three, had raced a number of times you could assume they were sound. 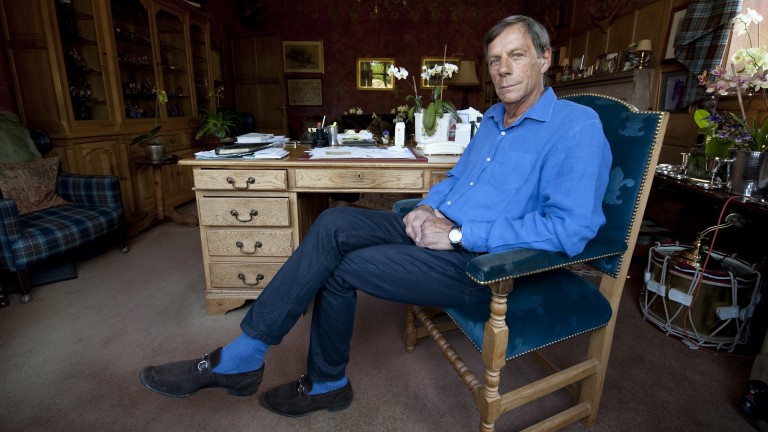 Sir Henry Cecil could pick winners among more than one type of animal
Edward Whitaker
"I liked a mare to be a winner, and to have a large number of progeny, which had won a minimum of five or six races.

"You want to see black type, but you don’t want to see it all in the third dam, and the second and first to be ordinary winners, because that’s a weakening pedigree.

"I like line breeding, five generations. Inbreeding, I’d call that within three generations. You want to see replications in the pedigree, on the very top line, the sire’s female line, the dam’s top and bottom line."

Poland also had rules for a sire regarding its confirmation and winning record, and relied upon Carolyn to make physical assessments. "I’d always want a stallion to look like a stallion, and they don’t always," he says.

There is, of course, always room for some instinctive genius. Poland struck up a friendship with Sir Henry Cecil and once invited him to a hunt puppy show. Although the trainer had declared little interest in the animals, he muttered as an aside his idea of the top four on display. Moments later, the event judge revealed exactly the same order for the prize winners.

FIRST PUBLISHED 6:00PM, JUL 26 2019
When I came into racing, I was still young enough to go to the top people, they would very willingly share their knowledge with me