Bloodstock Latest FROM THE ARCHIVE

American Pharoah the star turn for Florida nursery of champions

After the death of JB McKathan, we reprint an interview from his annus mirabilis 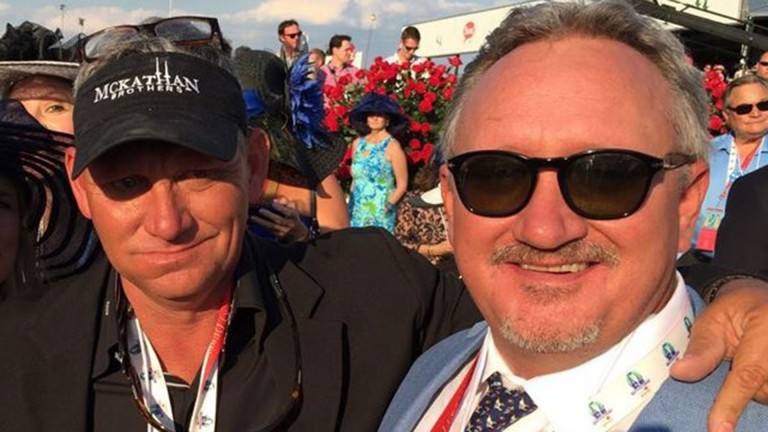 This article was first published in July 2015

Back in 1998, the McKathan brothers, JB and Kevin, were basking in another summer of Classic success. Real Quiet, a graduate of their training centre in Ocala, Florida, had won the Kentucky Derby and Preakness Stakes for trainer Bob Baffert and had fallen only a nose short of completing the Triple Crown in the Belmont Stakes. Only a year before, the same fate had befallen another outstanding Baffert-trained graduate of the McKathan academy in Silver Charm.

Silver Charm and Real Quiet lit up American racing during the 1990s. They came agonisingly close to supplying the sport with a much coveted Triple Crown winner and later gained deep fan bases by proving themselves as older horses. Neither Baffert nor the McKathan brothers could have asked for two more high-profile flag-bearers.

The McKathans have handled over 30 Grade 1 horses since entering the two-year-old breaking and training business in 1989. In addition to Silver Charm and Real Quiet, they include champions such as Midnight Lute and Indian Blessing as well as Dubai World Cup winner Captain Steve, the Kentucky Derby-placed pair Pioneerof The Nile and Bodemeister and Breeders’ Cup Filly and Mare Turf heroine Perfect Shirl.

Each of those horses are remembered as top-class performers on their day. Their current star, however, will be determined by history as one of the all-time greats. American Pharoah galloped to that lofty status last month when wrapping up the Triple Crown with an easy victory in the Belmont Stakes.

The first American Triple Crown winner since Affirmed in 1978, the current darling of American racing was the champion two-year-old colt of 2014 and is unbeaten in five starts this year, including four races at Grade 1 level.

In what was an excellent June for the McKathans, they were also represented at Royal Ascot by Wesley Ward’s brilliant Queen Mary Stakes winner Acapulco, who was sold by the operation for $750,000 to MV Magnier at the OBS March Sale in Ocala. Another farm graduate, four-year-old Tower Of Texas, won the Group 2 King Edward Stakes at Woodbine in Canada on June 20.

“We've been really fortunate but we can’t take credit for a lot of things,” says JB McKathan of his outfit, which trains up to 125 horses a year. “We are lucky to have clients who also love horses. It makes for a great team effort and we are thankful to them for sending us such special horses.”

As with all of Ahmed Zayat’s yearlings and like his sire Pioneerof The Nile before him, American Pharoah spent his formative training days in Ocala under the care of the McKathan brothers.

Also among Zayat’s group that year was dual Grade 3 winner El Kabeir, one of the leading lights among the three-year-old division in New York earlier this year, and the Grade 1-placed Mr Z, the recent winner of the Ohio Derby at Thistledown.

“Both were really nice colts,” says McKathan of El Kabeir and Mr. Z. “We knew they could really run. But it’s a tough year to be a good three-year-old when you run into a great horse like American Pharoah.”

And quite how special American Pharoah was even in those early days is evident from footage on YouTube of the colt galloping at the McKathans’ farm. Once given his head, the colt takes off. So visually impressive is the youngster as he shoots past the camera that an expletive is the initial reaction heard from the group of onlookers that are momentarily rendered speechless.

“He came to us in September as yearling, and left our training centre in May as a two year old,” remembers McKathan of the colt, who was retained by Zayat for $300,000 as a yearling. “He was a beautiful yearling. When he started speed work, he was awesome - a total freak.

“Silver Charm was a fighter and hard to pass. American Pharaoh is just pure brilliance: he has speed, stamina, the action - he is the whole package.”

Observations of brilliance and speed can also be used to describe Acapulco.

“We bought her in partnership with our long-time clients, Scott and Evan Dilworth, from last year’s Fasig-Tipton July Sale for $180,000,” says McKathan of the Scat Daddy filly who is out of the stakes-winning sprinter Global Finance. “She is one of the fastest looking horses I have ever seen.”

With progeny of Scat Daddy flourishing on artificial surfaces and turf, Acapulco was pencilled in more or less straight away to resell the following spring at the OBS March Sale, where the breezes are conducted on the artificial surface Safetrack. At the breeze show, she fired in a time of 9.3/5 seconds for a furlong - the joint fastest time of the 610-strong catalogue - and duly sold for $750,000 to MV Magnier.

“It wasn't a real surprise,” says McKathan of the price tag. “We actually thought she may bring more. She put on a real show at that sale.”

With the Nunthorpe Stakes nominated as a target for Acapulco, and Mr Z likely to step back up into Grade 1 company for Zayat sooner rather than later, the McKathans’ summer could be about to get even better. However, 2015 will always belong to one horse.

“We are so lucky,” says McKathan. “Just to be around a horse like American Pharoah cannot be described in words. The Triple Crown is a part of history and can’t be taken away.”

FIRST PUBLISHED 3:16PM, FEB 4 2019
American Pharoah was a beautiful yearling. When he started speed work, he was awesome - a total freak