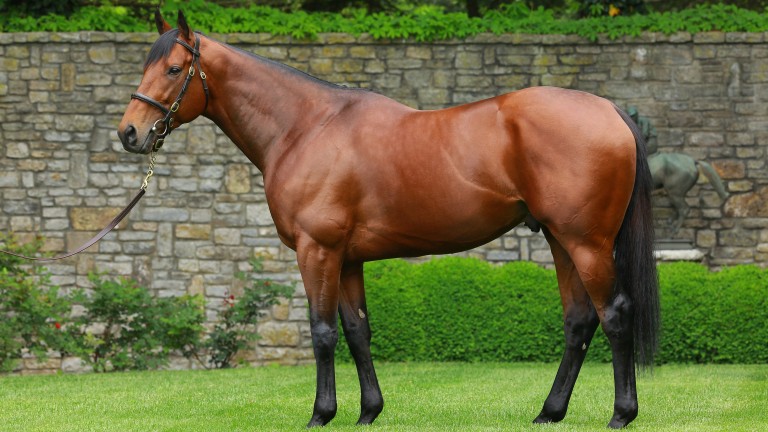 An impressive number of the world’s foremost breeders joined in sending some of the best broodmares on the globe to Triple Crown winner American Pharoah in his first season at stud, including a dozen that either won European Group 1 races or produced Group 1 winners.

Of the 208 mares in American Pharoah’s first book, 55 mares (or 26 per cent) were either Grade/Group 1 winners or dams of elite winners, according to data supplied by the American Jockey Club and Coolmore, which stands the son of Pioneerof the Nile at its Ashford Stud near Lexington. Many more are half-sisters or daughters of top performers.

Coolmore partners bred more than a dozen of their own mares to American Pharoah, topped by Moyglare Stud Stakes winner Maybe and Cherry Hinton, dam of Irish Oaks winner Bracelet.

Ashford manager Dermot Ryan said Coolmore is committed to establishing the 2015 American Horse of the Year as a top sire worldwide. With his first foals due to begin arriving next month, Coolmore are already looking forward to eventually sending some of American Pharoah’s offspring to Ireland for training.

“There's no doubt American Pharoah is an international commodity, and his exploits on the track last year resonated with breeders all over the world,” Ryan said. “He’s received support from some of the biggest breeders internationally and we've also supported him with many of our best mares, a number of which were brought over from Ireland specifically to be bred to him.

“American Pharoah will be given every chance to prove himself on the international stage,” Ryan continued, noting that trainer Bob Baffert believed the first horse to sweep the Kentucky Derby, Preakness and Belmont Stakes in 37 years could have won on turf if he had been given the chance.

“He's such an exceptional mover you would think he could run on anything,” Ryan said. “We'll continue to support him each year and will be sending some of his best stock to Aidan O’Brien at Ballydoyle, which is a huge boost to any young sire. We’re committed to making him a success on the world stage, and with the support of so many successful breeders with quality mares, he is going to get exposure in all the right places.”

Maybe, whose sister Promise To Be True won this year’s Silver Flash Stakes and finished second in the Prix Marcel Boussac for Susan Magnier, Michael Tabor and Derrick Smith, was sent to Kentucky from Japan, where she produced two foals by Deep Impact, including a juvenile filly named Pavlenko who is in training with O’Brien and a yearling colt.

Cherry Hinton, by Green Desert out of Urban Sea and thus a half-sister to Galileo and Sea The Stars, produced a filly by Camelot in Kentucky in February after delivering a filly by the same sire in Ireland in 2015.

Among the other Coolmore mares that visited American Pharoah this spring are 1,000 Guineas winner Virginia Waters, who foaled a colt by Australia in April; Along, a granddaughter of Urban Sea by Smart Strike; Vallee Des Reves, dam of Coronation Stakes winner Maids Causeway; Phoenix Stakes winner Damson, who produced a War Front filly this spring; Untouched Talent, the Storm Cat mare acquired for $5 million who is the dam of young US sire Bodemeister; Charming, dam of American champion Take Charge Brandi; and Grade 1 winners Circle Of Life and Marylebone.

Meanwhile, commercial breeders from around the world clearly were enthusiastic about a special two-for-one breeding at a fee of $200,000 that was offered by Coolmore as records show most bred two mares, or in a few cases, four or six mares to the champion.

Quality mares came from other cornerstones of the sport in Europe as well.

The Niarchos family’s Flaxman Holdings dispatched Mohini, a daughter of Galileo and French champion Denebola, and Pachattack, a $1.2m purchase and an American Graded winner as well as a stakes winner in England, to American Pharoah’s court.

Mohini was offered at the Keeneland November sale but not sold on a bid of $525,000 while carrying her first foal.

In addition to Mohini, 11 other mares in foal to American Pharoah were offered during the November bloodstock sales in Kentucky, with ten sold for an average price of $492,500. Among the buyers were Katsumi Yoshida, owner of Northern Farm in Japan; Perry Martin, co-owner of Dubai World Cup winner California Chrome; Clarkland Farm, breeders of multiple champion Beholder, and China Horse Club.

Loudly, a daughter of War Front in foal to American Pharoah, was purchased for $325,000 by China Horse Club, which bred its Grade 1 winner Iotapa, a $2.8m purchase by Afleet Alex, to the Triple Crown winner, along with the Military mare Dundalk Dust.

Absent from the list of mares bred to American Pharoah are any from the Maktoum family’s global collection, continuing what has become a tradition: for years, the Maktoums have not supported Coolmore stallions and Coolmore partners do not support Darley or Shadwell stallions.

However, other breeders did not hesitate, including most of North America’s most successful enterprises. For his part, American Pharoah quickly adjusted to his new duties.

“It was just [about] a year ago that American Pharoah arrived at Ashford and it’s been a privilege for everyone at the farm to be associated with him in that time,” Ryan said. “He’s got an exceptional temperament and really has been a pleasure to do anything with. He took to the breeding process with ease and had a very successful first breeding season.”