Aisling Crowe reports from the concluding day of the Derby Sale 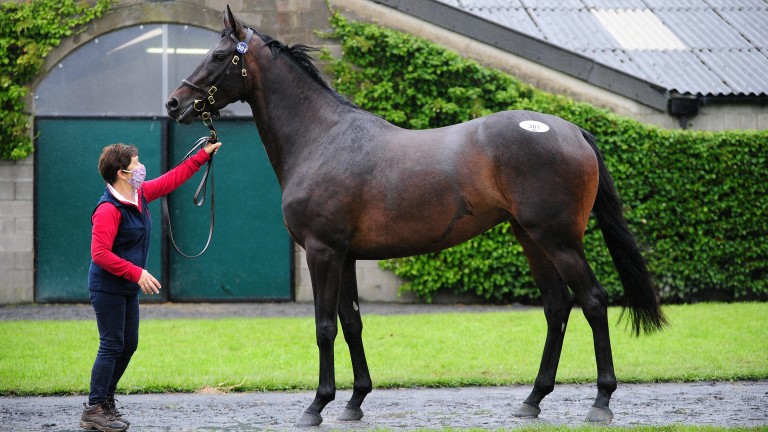 The first winds of Storm Ellen blew across Tattersalls Ireland but in Barn A, where the Walk In The Park half-sister to outstanding two-mile chaser Altior was housed, she was unperturbed.

While the unseasonable weather did its worst, the ringing of steel on concrete and the auctioneers’ voices coming through the PA system combined with a never-ending stream of visitors to the stable. Through it all the Behan family’s three-year-old filly was impervious to it, lapping up the attention and basking in the affection like an old labrador.

That calm and affectionate nature ensured that when it was her turn to step under the spotlights of the sales ring, around which a maximum permitted crowd gathered in a socially distant manner, the gorgeous daughter of Monte Solaro was a true professional.

On the podium Simon Kerins opened the bidding at €100,000 and it quickly became a three-way tussle between Ian Ferguson, Peter Molony and Gordon Elliott for the most anticipated horse of these delayed store sales.

Elliott, taking instructions on the phone, standing alongside Aidan O’Ryan, saw off his rivals and brought the hammer down at €300,000, making her the second most expensive filly ever sold at the Derby Sale.

The trainer affirmed his clients had no intention of being denied in their quest for the sought after filly from the first Irish-bred crop of Coolmore’s Derby runner-up.

“She was the outstanding horse in the sale and is for KTDA Racing, David Page and Dave Rabson, who are great supporters of the yard," said O'Ryan. "They have followed Altior all his career and had their hearts set on the mare. She’ll go into training with Gordon and they want to breed from her after her racing career.”

Walk In The Park was also sire of the €195,000 gelding out of Maple Lady who went the way of Pat Gallagher.

Inbred 3x3 to Sadler’s Wells, and out of a winning Saddler’s Hall three-parts sister to Cane Brake and Judge Roy Bean, he was a wonderful pinhooking success for Jimmy Murphy of Redpender Stud, who purchased him as a foal for €47,000 at the Tattersalls Ireland November National Sale.

Russell Mac Nabb, who was buying on behalf of Gallagher, said: “He’s for Pat and will be trained by Willie Mullins, Pat’s always wanted to have a good horse in training with Willie and this one looks a nice one to send to him. He was one of the picks of the sale. Gordon Elliott trains his half-brother Eskylane, so as he’s the underbidder on him that’s a good sign!”

Flemensfirth in the news

Fillies with impeccable pedigrees and the looks to complement their families’ success were in demand on both days of the Derby Sale, and a Flemensfirth daughter of the Grade 3 winning hurdler Our Girl Salley created a stir.

A half-sister to Grade 2 winner Black Tears, who was also runner-up in the Coral Cup at the Cheltenham Festival, she was bought for €155,000 to race in the famous navy blue silks of Sue Magnier.

“She’s an absolute queen,” said Gerry Aherne from Coolmore. “MV (Magnier) saw her yesterday and loved her. She’ll race for Mrs Magnier and a trainer will be decided for her soon.”

He added: “Flemensfirth has been a great servant for us and they aren’t making them any more, as he’s been retired.”

Early in proceedings, the sale of Castledillon Stud’s gelding by Getaway for €170,000 to Kevin Ross set the tone.

Timmy Hillman, who had sold Tuesday’s top lot, was making a significant return on his investment of €30,000 in him as a foal at Tattersalls Ireland. He is the first foal of unraced Milan mare La Scala Diva, who is a half-sister to four winners from the family of Egypt Mill Prince.

“He was the pick of the sale for me and I thought he was going to be an expensive horse,” said Ross after signing the docket.

“He’s lovely, well-balanced and very light on his feet for such a big horse. A long-standing client of ours is the buyer and the horse will be sent into training with Gordon Elliott.”

That was the first of two six-figure sales for progeny of the Group 1- winning Monsun stallion as later in the day Joey Logan, acting on behalf of Andy and Gemma Brown, went to €105,000 for lot 365.

Getaway returned impressive statistics with an average price for his offspring on day two running at €68,125, which was 40 per cent higher than the average achieved for the second day of the sale.

“He will go into training with Gordon Elliot,” Logan revealed. “Andy and Gemma have a really nice bunch of three-year-olds to run on the track and hopefully they will be lucky for them.”

Late in the day, Logan pounced for a well-related Kayf Tara gelding from Richard Frisby’s Glenwood Stud, for the same owners, but this time for €160,000.

He is a close relation to Henry de Bromhead’s Grade 2 Foxrock Handicap Chase winner Minella Times, one of four runners and winners for the dam, the Anshan mare Triptoshan.

The handsome brown gelding had cost Frisby €50,000 as a foal and Logan revealed that he had to wait almost until the end of the Derby Sale to nab the horse that Browne, a businessman in the UK, wanted the most.

He was the most expensive store at the Derby Sale by the Overbury Stud sire, the leading British-based National Hunt stallion for some years now but whose retirement from covering duties was recently announced.

FIRST PUBLISHED 7:40PM, AUG 19 2020
They have followed Altior all his career and had their hearts set on the mare