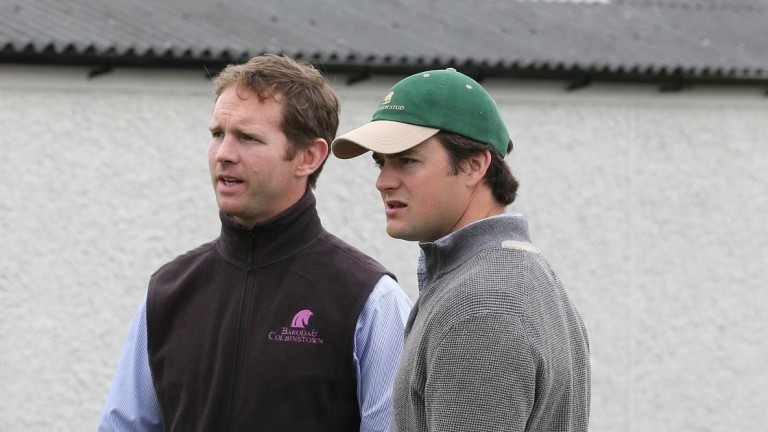 Save for Tiger Roll, the Myerscough family would have been part of another piece of Grand National folklore on Saturday.

The distinguished Irish racing dynasty, who own Colbinstown Stud in County Kildare, were the breeders of the gallant runner-up Magic Of Light, who made an almighty effort - including surviving a heart-in-mouth moment at the Chair - to nearly become the first mare to claim the Aintree spectacle since Nickel Coin 68 years ago.

At least for David Myerscough and his parents Philip and Jane, there had already been the more than adequate consolation of having provided another of the meeting’s stars in Champ, the resounding winner of Friday’s Doom Bar Sefton Novices' Hurdle from the lineage of the great Best Mate.

Magic Of Light, who is by Flemensfirth, was the final foal from Saumarez mare Quest Of Passion, and is a half-sister to several other jumpers who have represented themselves well for the Potts family in Pingshou and Sizing Platinum.

"Mum and dad bought the mare with my uncle Charles O’Brien as a Flat breeding prospect, she had a lovely Flat pedigree that includes the likes of White Muzzle and all that.

"Then Mughas [Quest Of Passion's first foal] came along, a Sadler’s Wells who was originally bought by Sheikh Hamdan for a nice bit of money [Ir£380,000] but was later a Graded hurdler, and then they decided to go down the National Hunt route."

In partnership with Colbinstown’s sister stud Baroda, Magic Of Light was first sold to Stephen Kemble for €20,000 as a four-year-old at Goffs in 2015.

"I suppose it was when times were a little bit tricky, there wasn’t the incentive for fillies as there is now," Myerscough explained. "As a foal she was very hardy, she was always a lovely-topped filly from the word go.

"Sadly the mare passed away, just with old age, but it’s a lovely family. In hindsight we obviously took the wrong approach [in selling]. We were kind of hoping to buy her back at one stage but I think it might be a bit tricky now!" 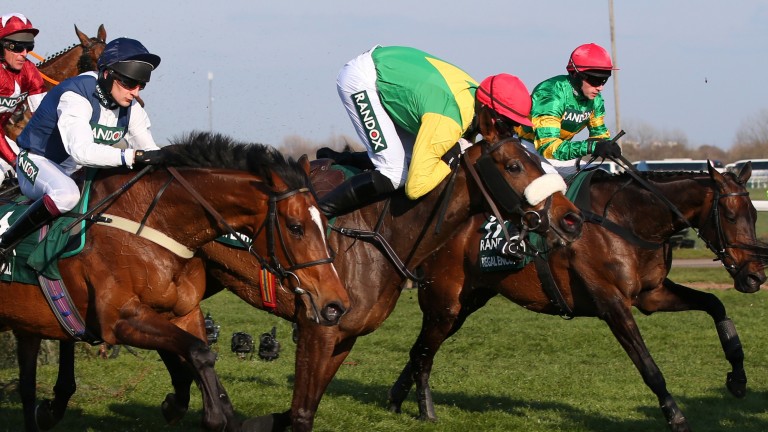 Clinging on: Paddy Kennedy does well to maintain the partnership with eventual runner-up Magic Of Light at Aintree (red cap)
Alex Livesey
Even if it might be up to someone else to embark upon the breeding route with Magic Of Light some day, the flame of Champ’s family is very much alight at Colbinstown.

Philip and Jane Myerscough acquired triple Gold Cup winner Best Mate’s dam Katday and raced her daughter China Sky with Nicky Henderson. Champ, who was knocked down to Aiden Murphy for €40,000 as a foal at Tattersalls Ireland, was her first offspring.

"Thankfully we have a few from Champ’s pedigree, which is a relief," said David. "He’s very exiting, it has to be said.

"We generally try to sell the foals, thankfully we didn’t sell his Walk In The Park brother as a foal, although we did try [vendor buyback at €52,000]. Champ at that time wasn’t a Grade 1 winner - there was a lot of talk about him but he hadn’t really delivered.

"We knew we weren’t going to sell unless we got the right money, we didn’t manage to but he’s gorgeous. We’ve a three-year-old going to the Derby Sale by Fame And Glory, and a two-year-old Presenting to sell next year. And China Sky is doing great, she was just covered by Soldier Of Fortune."

Although Colbinstown’s primary business is with the Flat side of the sport, its exclusive collection of jumps broodmares are now making a commercial contribution too.

"While the National Hunt was viewed initially as a hobby, it has paid us very well," Myerscough said. "Katday and her daughter, Sidalcea, who are sadly both no longer with us, were financially very exciting.

"The [Best Mate] pedigree has sort of come alive again, we’ve a mare in partnership with my parents from the same family in Wood Lily. She’s the dam of Emily Moon, who’s a three-time winner and will hopefully get black type.

"Hopefully we might get a few fillies out of China Sky and we also have a sister to Bobs Worth. It’s only the three National Hunt mares, and maybe it’s a little easier to get up to the top end in National Hunt. But both Flat and National Hunt are all polarised; everyone wants to get to the top, but it’s not easy."

FIRST PUBLISHED 6:44PM, APR 7 2019
We were kind of hoping to buy her back at one stage but I think it might be a bit tricky now!