Almanzor's half-brother Another Sky sparkles on debut at Chantilly 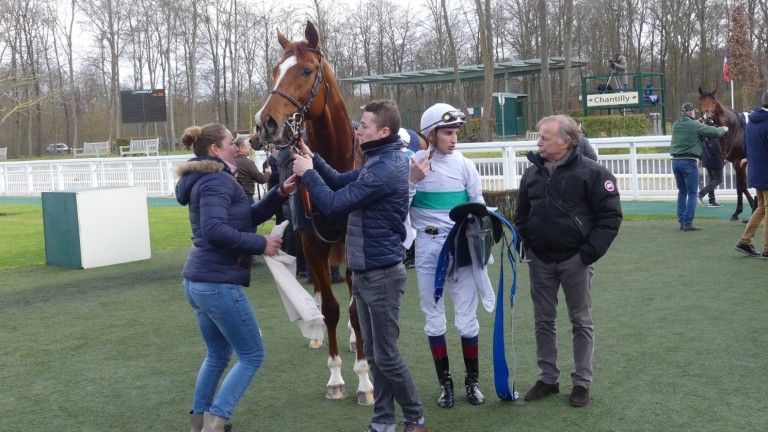 Almanzor's half-brother Another Sky was an impressive debut winner at Chantilly
Scott Burton
1 of 1
By Tom Peacock and Scott Burton 3:39PM, MAR 3 2020

Freddy Head felt he could have something special on his hands as soon as he set eyes on Another Sky, whose breeding as a half-brother to European champion Almanzor was enough to get excited about.

The colt's first appearance on the racecourse justified every expectation as he emerged a strikingly impressive winner of the Prix de la Traversiere at Chantilly on Tuesday.

Like the French Derby and dual Champion Stakes winner, Another Sky is a product of Haras d'Etreham, with the only difference being that the three-year-old Le Havre colt was bred by George Strawbridge. He is the first foal produced since the American owner-breeder acquired Almanzor's dam, Darkova.

Aurelien Lemaitre quickly had the Freddy Head-trained Another Sky into the lead in the nine and a half furlongs event for newcomers and dictated the pace throughout.

The jockey coaxed a little more effort from his mount with a couple of furlongs remaining and received such an instant response that he could soon drop his hands and coast home four and a half lengths clear of two other nicely-bred newcomers.

They were Galawi, the Wertheimer family’s son of Dubawi and Galikova, the Prix Vermeille winner and half-sister to the incredible Goldikova, and Weekender's three-parts brother Classical Wave.

"I am very happy with that," Head said. "He is quite a backward horse who is still a bit babyish and will undoubtedly progress. He had a minor problem at two which prevented him from running but ultimately that’s done him no harm. He has a lot of size about him and so waiting with him was probably a good thing.

"He has everything going for him and is a horse with an extraordinary presence. He has the size and a great action, as well as a good character so we’ll see where he ends up."

Another Sky has an early entry in the Prix du Jockey Club and was following in the footsteps of another Le Havre stablemate, Motamarris, who went unbeaten until finishing third to Sottsass in the French Classic.

"Motamarris debuted in this race last year but this one has more scope than him," Head said. "He is at least up to achieving what Motamarris has.

"Running today has given me time with him and I can decide whether to go straight to a good race or else take a more discreet route with him."

FIRST PUBLISHED 3:39PM, MAR 3 2020
I knew as soon as he walked into the yard and right from the start he showed himself to be out of the ordinary.