27 lots set to be offered after racing on Thursday 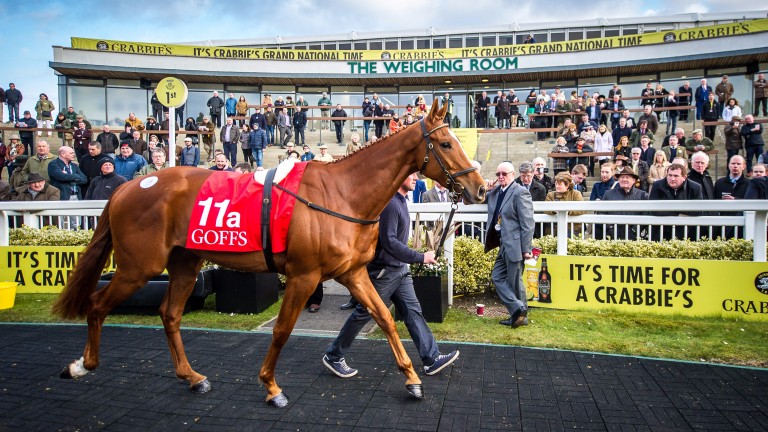 Samcro: festival hero was the star of the first Aintree Sale
Sarah Farnsworth/Goffs UK
1 of 1
By Zoe Vicarage 6:00PM, APR 11 2018

Colin Bowe's Milestone Stables has a firmly established reputation for supplying point-to-pointers capable of making up into jumping superstars and the handler will be looking to supply a third top lot in as many years at Thursday's Goffs UK Aintree Sale.

Ballymore Novices' Hurdle hero Samcro took top billing at the inaugural edition of this sale in 2016 when Gordon Elliott snapped him up for £335,000, an investment that has since been handsomely rewarded.

On Thursday, Bowe returns to Aintree with two choice lots on offer in Hill Sixteen (Lot 8) and Kiltealy Briggs (20). One of a number of supplementary entries, Hill Sixteen made a winning debut at Dromahane on Sunday and the son of Court Cave hails from the family of Hennessy Gold Cup winner Ever Blessed.

Late last month, former Coolmore National Hunt sire Fame And Glory supplied his first winner under rules when the Noel Meade-trained Young Ted won a bumper at Thurles. Bowe has the only lot on offer by the middle-distance performer in Kiltealy Briggs, who is out of a sister to 2011 Grand National hero Ballabriggs and was runner-up on his debut at Inch last month.

Dubai Destination, the sire of Willie Mullins' Grade 1-winning hurdler Next Destination, looks to have another exciting prospect in the shape of Daniel Murphy's Destinys Choice (9). The five-year-old has had two starts between the flags with her second at Lismore last month, which saw her win by an impressive 12 lengths.

A total of 27 lots will be offered by Goffs UK and other eyecatchers set to go under the hammer include Champagne Platinum (10), a son of Stowaway who was an impressive six-length winner on his debut at Quakerstown earlier this month, and Malone Road (17), a son of Kalanisi who also struck on his first start at Loughanmore at the end of last month.

The sale gets underway in the winner's enclosure at 5.45pm, following the conclusion of racing on Thursday.

FIRST PUBLISHED 6:00PM, APR 11 2018
One of a number of supplementary entries, Hill Sixteen made a winning debut at Dromahane on Sunday