Aisling Crowe reports from the final session of the February Sale 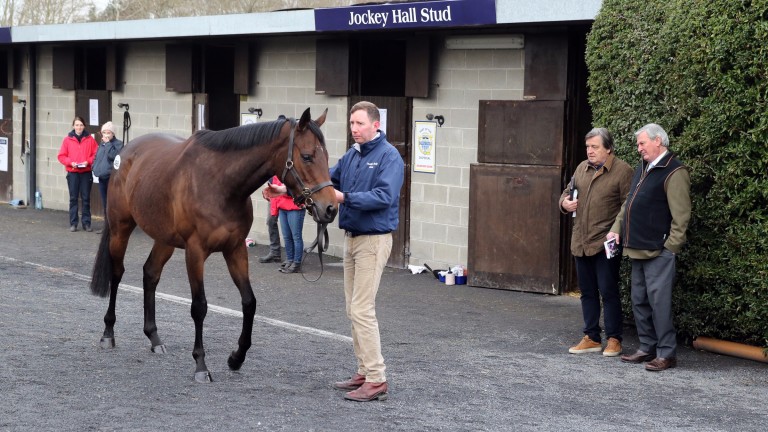 Edith Wharton was due to be the star attraction in the third and final session of the Goffs February Sale, which featured drafts of blueblooded fillies and mares from Ballymacoll Stud, Godolphin and the Aga Khan.

However, the daughter of Dubawi out of the brilliant triple Group 1 winner Islington had her thunder stolen at the very end of the sale by a bidding war for Group 3-placed mare Military Angel.

Kildangan Stud director Jimmy Hyland, Matthew Houldsworth of Howson and Houldsworth Bloodstock and Hugo Merry were the trio fighting it out for Military Angel, a daughter of Big Brown who hails from the family of globetrotting superstar Alexander Goldrun.

When bidding went past the €200,000 mark, Hyland and Houldsworth had to give best to Merry, who gave €210,000 on behalf of a longstanding client of Marc-Antoine Berghgracht's MAB Agency.

Merry reported: “She was a good racemare, by a Kentucky Derby winner, and goes back to a lovely taproot mare.

"It is a fantastic family and the dam, Hannabarbera, had tremendous speed for a Darshaan mare - she won twice over five and five and a half furlongs. She will be going to France."

The five-year-old was trained on the Curragh by Michael O’Callaghan and won on her only start at two and was placed in the Fairy Bridge Stakes and the Leopardstown 1,000 Guineas Trial, both at Group 3 level.

Novellist Edith Wharton received a Pulitzer prize for her literary prowess and she could have scripted the drama that saw her equine namesake robbed of her title as most expensive lot of the entire sale.

Edith Wharton was the third horse into the ring, selling shortly after 10am, and it appeared that buyers hadn’t fully digested their coffee as bidding for the mare was slow to get going.

Once it did eventually creep past €50,000, plenty were alert and a number of parties vied for the filly named after the Nobel Prize nominee and World War I heroine.

In the end it was Andy Smith bidding on behalf of Peter Brant’s White Birch Farm who was revealed as the new owner when auctioneer Henry Beeby brought the hammer down at €200,000.

Brant was extremely busy at Goffs during the autumn, picking up some choice lots from the Wildenstein dispersal, including Beauty Parlour.

“She will probably go to France and be covered by Siyouni,” revealed Smith. “She will remain in Europe for the time being but could eventually be sent to America.”

The Jessica Harrington-trained Olive Branch was the most popular of the remaining four Ballymacoll fillies that formed the first part of the complete dispersal of the historic County Meath farm’s stock.

A three-year-old daughter of Arcano out of Athene, she is a half-sister to the Grade 1 winner Sir John Hawkwood, victorious in the Metropolitan at Randwick last October, and the Group 3 winners Side Saddle and Greek Renaissance.

The O’Callaghan family of Tally-Ho Stud paid €60,000 for Olive Branch, who ran once for former trainer Sir Michael Stoute at the end of 2016.

Another beautifully-bred filly to catch the attention of buyers consigned by Jockey Hall Stud was the gorgeous La Reveuse, from the wonderful family of Loup Sauvage and Loup Solitaire.

The five-year-old mare was sold on behalf of owners Ballymore Thoroughbreds and she sparked a bidding war between Matt Coleman of Stroud Coleman Bloodstock and Ballylinch Stud, both eager to acquire the daughter of the incomparable Galileo out of a Listed-placed Rock Of Gibraltar mare.

In the end it was Coleman who won the day, paying €80,000 for La Reveuse for an Irish breeder.

“There is plenty to run for this mare too; the New Approach three-year-old filly is very nice and in training with Andre Fabre and there are still sisters by Teofilo and Sea The Stars to make the track.”

Regan stocking up for Rock

Another breeder collecting a gem from Jockey Hall’s select draft was Maurice Regan, who bought Catchphrase, a four-year-old daughter of Dubawi, as a date for his homebred stallion Fascinating Rock through Eamonn Reilly of BBA Ireland for €64,000.

Her sale represented a significant profit for her owners as she was purchased by Susan Leahy of SJ Leahy Bloodstock for only 11,000gns from the Godolphin draft at Tattersalls in November.

Reilly also shopped in the Godolphin draft for a date for Fascinating Rock. The pick of his purchases at €72,000 was Rhythmic, an eight-year-old daughter of Dubai Destination in foal to Dawn Approach.

A winner at two and three, she is the dam of the winning juvenile African Beat by Cape Cross, and has a two-year-old son of Shamardal and a yearling filly by Daiwa Major to run.

She is from the magnificent family of Urban Sea and King’s Best, as her dam is a half-sister to Prix du Jockey Club winner Anabaa Blue and to the dam of Tamayuz. They are aout of Allez Les Trois, a Riverman sister to Urban Sea.

“She too has been bought for Fascinating Rock," Reilly said. "Maurice really believes in him as a stallion and is assembling a fine group of mares to send to him at Ballylinch. He is proving very popular with breeders who are very enthusiastic about supporting him."

The Godolphin draft was the source of spectacular fireworks late in the evening with buyers scrambling for the gorgeous Street Cry mare Expressly, who is a half-sister to Group 1 winner Rio De La Plata. She was purchased for €90,000 by John Walsh on behalf of an American client, and he was thrilled to be able to buy into one of Argentina’s best families at long last.

“She is a beautiful mare and we had tried to buy a half-sister previously but were unsuccessful," Walsh explained. "It is a fantastic family and being a daughter of Street Cry made her an even better proposition. She won her maiden at Ascot by four lengths and ran in Listed company so she was a good filly. All going to plan she will be shipped to America."

Godolphin provided a substantial percentage of the day’s most expensive lots during a session of very lively trading.

Rabbah Bloodstock bought the most expensive of them, going to €90,000 for Sarinda, a Listed-winning daughter of Dubawi in foal to Dawn Approach. Her dam is out of a half-sister to Offshore Boom, the dam of Rock Of Gibraltar, and the second dam of Intricately, who provided Joseph O’Brien with his first Group 1 winner as a trainer in last year’s Moyglare Stud Stakes.

Permission Slip, a Listed-placed mare by Authorized carrying a Night Of Thunder foal, was knocked down to Cormac McCormack Bloodstock on behalf of an undisclosed client for €80,000.

She is out of the Green Desert mare Najmati, who is a full-sister to Kheleyf and Bint Allayl, winner of the Lowther and Queen Mary Stakes. It is also the family of La Voyageuse and Time Bandit.