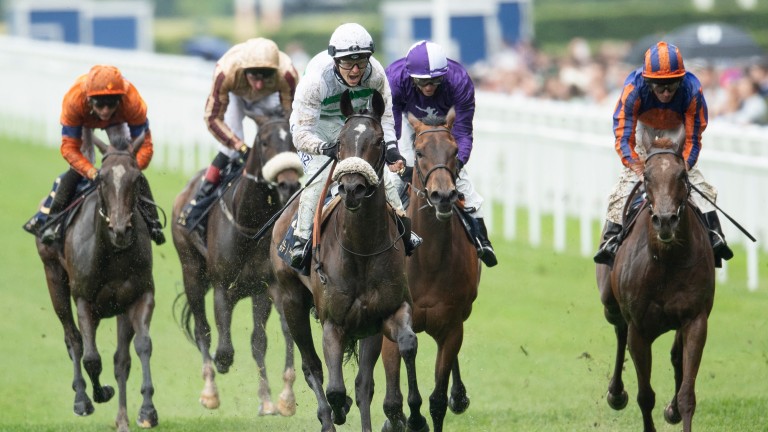 There was complete satisfaction for owner-breeder Kirsten Rausing as Sandrine produced a first Group win for stallion Bobby's Kitten in the Albany Stakes at Royal Ascot on Friday.

Rausing's Lanwades Stud in Newmarket has stood the Breeders' Cup Turf Sprint winner since he retired on a high from one run in Dermot Weld's care in 2016 and the son of Kitten's Joy from the family of the mighty Theatrical is starting to fulfil his brief.

Sandrine is one of 50 foals from Bobby's Kitten's second crop and was already among his 22 worldwide winners when opening her account on her debut at Kempton last month.

After she had maintained her prominent position through the testing going for David Probert and trainer Andrew Balding, Rausing explained just how closely she knew the filly's breeding.

"I bought I think her fifth or sixth dam as a yearling in Goffs in 1976 and the family has been with me ever since," she told ITV Racing.

"This filly, everything on her catalogue page from top to bottom, we have bred at Lanwades Stud. All my animals are home-bred so it gives me tremendous pleasure to to keep the continuity of the thing and I tend to support my own stallions. This filly is Bobby's Kitten's first stakes winner, first Group winner, so we’re thrilled with that."

Sandrine is the second foal of ultra-consistent Pivotal mare Seychelloise, who has already produced another dual winner this year in Sea The Shells. It is a rich family that features the 1985 King George winner Petoski, while Sandrine's grand-dam is Rausing's Queen Mary runner-up and subsequent Prix d'Arenberg scorer Starlit Sands.

FIRST PUBLISHED 4:30PM, JUN 18 2021
This filly, everything on her catalogue page from top to bottom, we have bred at Lanwades Stud