Two-year-old Golden Spell won by a neck at Bellewstown 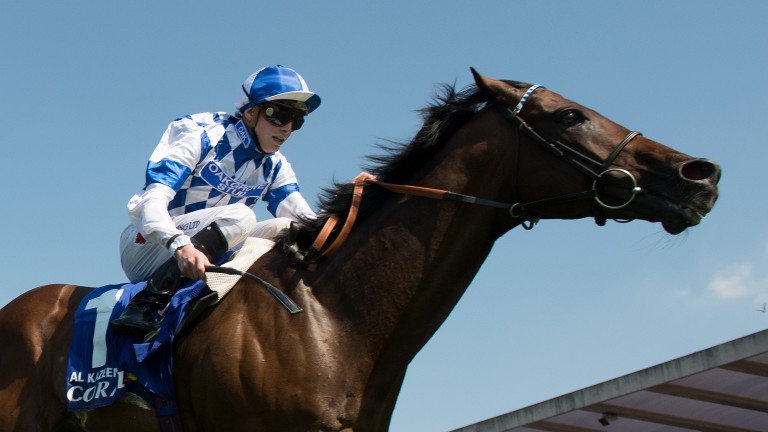 Al Kazeem: son of Dubawi was a four-time Group 1 winner who came back from an aborted season at stud as good as ever
Edward Whitaker
1 of 1
By Tom Harris 7:58PM, JUL 6 2017

Al Kazeem may have trouble getting foals on the ground but - on limited evidence - he doesn’t struggle in passing on his ability to his progeny. The sub-fertile son of Dubawi has had just one runner, the Qatar Racing filly Golden Spell, but she became his first winner on her second start on Thursday.

The Johnny Murtagh-trained filly had finished third on her debut at Cork just over two weeks ago and over the same trip of 5f on Thursday, she showed her experience when running on strongly to catch Brick By Brick to win by a neck.

Cross Pattee, the dam of Golden Spell, is an Oasis Dream half-sister to Group winners Across The Stars, Bronze Cannon and Valiant Girl. David Redvers bought Cross Pattee, with this filly in-utero, for 115,000gns at the Tatterstalls December Breeding Stock Sale on behalf of Qatar Racing.

Al Kazeem was slow to come to hand as a racehorse in comparison to his daughter. He made his debut in October of his two-year-old career, winning a maiden later that month. At three he showed himself to be of Group class but it was not until his five-year-old season that he announced himself as a top performer.

He won five Group races on the bounce that campaign, beating Camelot in the Tattersalls Gold Cup, Mukhadram and The Fugue in the Prince of Wales’s Stakes and Declaration Of War in the Coral-Eclipse. He retired to The Royal Studs at the end of that year but his fertility issues quickly became evident and he has just 23 progeny to show from his first season covering.

He returned to Roger Charlton in the spring of 2014 to make a racecourse return in the July of that year. In his second racing career he ran eight-times with the highlight being a second victory in the Tattersalls Gold Cup.

Al Kazeem has since returned to covering duties and he has stood at Oakgrove Stud for the past two seasons at an advertised fee of £12,000.