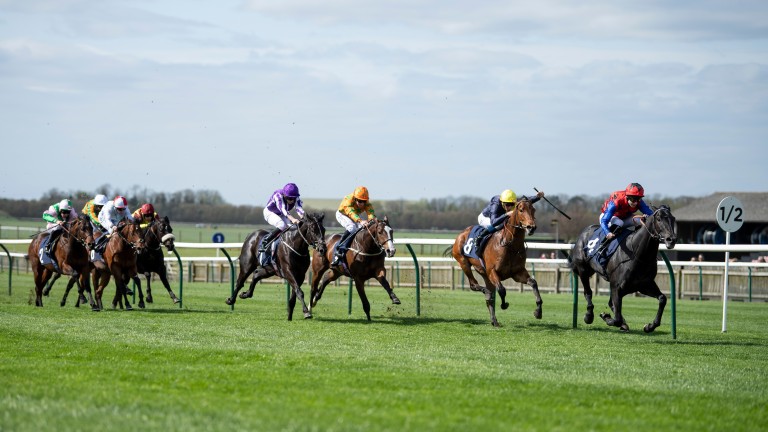 Alive and kicking: Jackstar puts his aggression to good use to win at Newmarket
Edward Whitaker
1 of 1
By Mark Scully UPDATED 5:04PM, APR 17 2018

Jackstar, a colt who made quite the impression when kicking his handler in the face at last year's Goffs UK Doncaster Premier Yearling Sale, turned heads again on Tuesday as he ran out the winner of Newmarket's first two-year-old contest of the season.

Trained by Tom Dascombe and ridden by Richard Kingscote, Jackstar picked up a Plus 10 bonus for his victory, in which he hit the front approaching the final furlong and scored by a length and three quarters from Olympic Glory colt Ynys Mon.

Aidan O'Brien's Scat Daddy newcomer Van Beethoven made up ground to finish third, another length away, having missed the break.

Jackstar was signed for by SackvilleDonald at £120,000 at Doncaster from the draft of Hollyhill Stud and owner Caroline Ingram revealed following the debut win that it was Jackstar's boisterous antics that first caught her eye.

"He's a horse with presence and a lot of aggression," said Ingram, who has owned horses with Tom Dascombe since 2007. "In fact, he kicked his handler in the face and so I thought that if they could control that aggression, this animal had everything you need to be a racehorse."

By Yeomanstown Stud's Dark Angel, Jackstar is the second foal out of the Duke Of Marmalade mare Starbright, who won a Curragh maiden as a two-year-old, before finishing fifth behind Sky Lantern in the Group 1 Moyglare Stud Stakes and third in the Group 3 Park Express Stakes at three.

Earlier in the day at Newmarket, there was an impressive victory for the Godolphin newcomer Aurum in the opening 7f maiden.

Sheikh Mohammed's homebred, by Exceed And Excel, is out of the Mark Of Esteem mare Rachelle, making him a half-brother to the late Amadeus Wolf, a Group 1 scorer and former Haras des Faunes stallion, as well as the Group 3 winner Rouleau, who like Aurum was also trained by Charlie Appleby.

Third in the Royal Lodge when last seen as a two-year-old, Mildenberger holds entries in the Betfred Dante Stakes as well as the Tattersalls Irish 2,000 Guineas.