At The Sales GOFFS OPEN 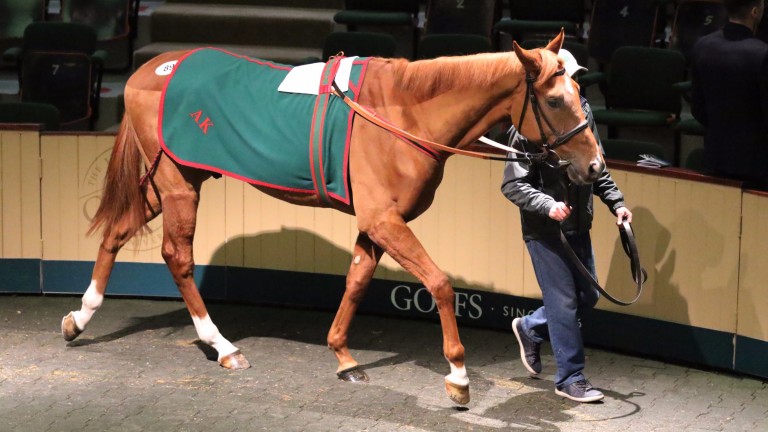 Aydoun: won over 1m4f for his former trainer Dermot Weld in September
Peter Mooney
1 of 1
By Aisling Crowe at Goffs 1:18PM, NOV 3 2016

Sparks flew in the Goffs sales ring on Wednesday as two horses from the Aga Khan draft took centre stage during the first session of the Open Yearling and Horses In Training Sale.

Aydoun was the first to provoke a bidding war with offers for the three-year-old son of Mastercraftsman quickly reaching six figures.

It was Bill Dwan who prevailed over Russell McNabb with a bid of €200,000 for the half-brother to Group 3 winner Alayan, the Group 2-placed Alarazi and the Listed-winning Alaivan and out of a winning half-sister to champion three-year-old Alamshar.

The figure Dwan parted with for the lightly raced 1m4f winner is the second-highest price for a horse at this sale since 2006.

"He's for a client of mine and hopefully he'll be a progressive stayer next year and become a Cup horse in time," said Dwan. "He's a good-moving and good-looking horse and will probably stay in Ireland to be trained."

Ebediyin another purchase for YuLong

The Aga Khan's drafts have long been coveted among owners hoping for staying stars and hurdling heroes and it was no surprise that Ebediyin stirred the buyers into a second bidding frenzy and again smashed the six-figure barrier.

A three-year-old Raven's Pass colt, the dual winner hails from one of the Aga Khan's most famous and prolific families. A son of champion three-year-old Ebadiyla, he is a half-brother to nine winners including Supreme Novices' Hurdle winner Ebaziyan.

Last employed as a pacemaker for stablemate Harzand, he too will be aimed at Cup races for his new connections.

"He's been bought for YuLong Australia and hopefully he'll turn into a Cup-type horse, maybe even a Melbourne Cup horse in time," Donohue explained.

"The trainer has not been decided yet as Mr Zhang has a number of trainers in Australia. We watched him run at Royal Ascot and he ran well in the Queen's Vase but then he was sacrificed as a lead horse for Harzand. He vetted well and he's a tough, sound horse mentally and physically. With his pedigree and action he'll appreciate a sound surface."

Donohue had a busy afternoon purchasing 14 horses for YuLong Investments.

"All the horses bought for Mr Zhang are going to be trained overseas and will be split between Hong Kong, Singapore and Australia."

Willie Mullins sourced Ebaziyan at this sale and Harold Kirk signed for another Aga Khan-bred for the champion trainer, paying €65,000 for the twice-raced Azamour colt Sayar.

"He's a gorgeous-looking horse and has only run twice," said Kirk of his purchase. "We've been lucky with horses bought from the Aga Khan in the past and he looks like making a lovely four-year-old on the Flat and over hurdles. He's a nice, scopey horse who can do two jobs."

Worth the wait for Ross

Bloodstock agent Kevin Ross had to wait until the second last lot came under the hammer on Wednesday for the one horse he had come to buy.

That horse was One In All In, a three-year-old son of Lawman out of Albaiyda, an unraced half-sister to Alamshar. A close relation to the €200,000 session-topper with their dams being half-sisters, Ross only paid a quarter of that price for his purchase.

Third on his latest start at Leopardstown on Sunday, that performance had impressed Ross.

Ross said: "That was a really eye-catching run at Leopardstown on Sunday and he is a good-looking horse. He is for an Irish client and he will go jumping but the trainer has yet to be confirmed."

Coalition to head to Hong Kong

Grand Coalition, a winning two-year-old who was fourth to Caravaggio in the Group 1 Phoenix Stakes for trainer Johnny Murtagh, was the highest-priced horse outside of the Aga Khan draft.

Felim MacEoin, representing a Hong Kong owner, purchased the son of Kodiac for €75,000.

"He is a nice model of a horse," said MacEoin, who used to work as a vet in Hong Kong before returning to Ireland and setting up his veterinary practice and bloodstock business in Galway.

"I bought him on behalf of a client in Hong Kong. He was a horse I liked a lot and Kodiac works well in Hong Kong."