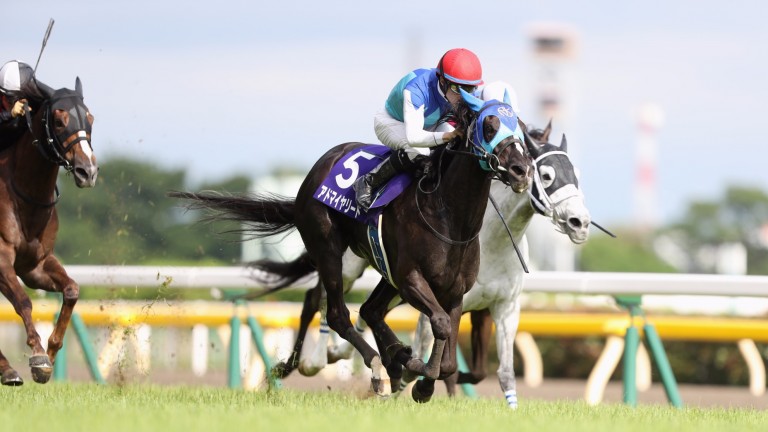 Admire Lead goes through a tight gap to provide jockey Christophe Lemaire with his 11th Grade 1 success in Japan in the Victoria Mile
Masakazu Takahashi
1 of 1
By Zoe Vicarage 2:49PM, MAY 14 2017

Deep Impact is not the only son of Sunday Silence responsible for securing the dominant sire line in Japan, and on Sunday there was a posthumous reminder of the role of the late Stay Gold when his daughter Admire Lead became his latest Grade 1 winner in the Victoria Mile.

A winner of the Hong Kong Vase, Stay Gold retired to Big Red Farm in 2002 and includes among his progeny two horses who between them finished second three times in the Prix de l'Arc de Triomphe - one of the great unrequited ambitions of the Japanese sport. Nakayama Festa was beaten a head by Workforce in 2010, while Japanese Triple Crown hero Orfevre went down by a neck to shock winner Solemia in 2012 before chasing home the runaway Treve the following year.

A six-time Grade 1 winner, Orfevre stands at the Shadai Stallion Station and will be represented by his first crop of two-year-olds this year.

More recently Stay Gold's flag has been flown by Gold Ship - and now by Admire Lead, who weaved through a big field in Tokyo under Christophe Lemaire to score decisively by just over a length.

Bred by Northern Farm, Admire Lead is out of the Grade/Group 3-winning Numerous mare Belle Allure, who is a half-sister to dual Group 1 scorer Jukebox Jury as well as stakes performers Pierrot Solaire, The Mask and Le Larron. Belle Allure, whose third dam is French champion juvenile filly Skelda, was purchased by Katsumi Yoshida for 375,000gns at Tattersalls December in 2010.

FIRST PUBLISHED 2:49PM, MAY 14 2017
Stay Gold includes among his progeny two horses who between them finished second three times in the Arc