Aboughazale builds up Sumaya US Stable with Keeneland purchases

Frances Relihan has been assisting him at the sales 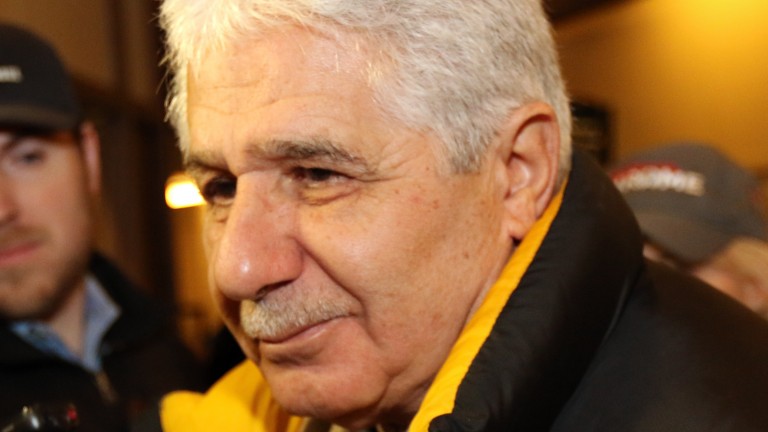 When Oussama Aboughazale turns his attention to something history tells us that it’s a wise idea to take notice.

Aboughazale’s family is the majority shareholder of the fresh produce division of Del Monte Fruit Company, but the Chilean-based Jerusalem native still finds the time to sit at the helm of his Chilean stud farm Haras Sumaya, maintain a quality string of horses in the US - where he has featured prominently in recent years as owner, breeder and, on occasion, trainer - and develop an interest in Australian racing.

Now that passion is being indulged further through an expansion of the North American side of the operation, Sumaya US Stable.

Aboughazale heads into the 2017 breeding season having recently purchased the former Belvedere Farm, a 235-acre property in Kentucky’s Bourbon County. The acquisition, which has been renamed Sumaya Farm, coincides with the retirement of his homebred Grade 2 winner Protonico to Taylor Made Farm on the other side of Lexington in Nicholasville. To that end Aboughazale, assisted by Frances Relihan, has been busy stocking up on mares with which to support the son of Giant’s Causeway.

That came hot on the heels of purchasing 11 lots, including ten mares worth $2,251,000 at last month's Keeneland January Sale to bring his number of Kentucky-based mares to 34.

The original cast included Protonico’s half-sister Kakadu, who foaled the first American Pharoah foal born worldwide, a bay colt, on January 3 at Brookdale Farm. The colt was also the first of five American Pharoahs due this year for Aboughazale.

“Mr Aboughazale has been breeding horses in Kentucky for 20 years,” says Relihan, who spent eight years as farm manager of Vinery and then Don Alberto Farm before taking up the role as consultant and bloodstock manager to Sumaya US Stable. “He has had a long relationship with Brookdale Farm and they’ve been wonderful to work with.

“The new farm is the latest addition to the operation. He’s a very successful businessman but he also has an absolute genuine love of the horse. He’s an accomplished horseman, a very good polo player, and when you’re working with him you can see exactly how much he enjoys horses. Now when he comes to Kentucky he can stay on his own farm and he will really enjoy it.”

Aboughazale stands nine stallions at Haras Sumaya, named in honour of his mother. They include the Group 1 sires Morning Raider (by Giant’s Causeway), Newfoundland (by Storm Cat) and The Mighty Tiger (a brother to Newfoundland) as well as The Mighty Tiger’s Group 1-winning son Omayad.

Newfoundland was a classy performer in the US for Aboughazale following his days with Aidan O’Brien, winning the Grade 3 Skip Away Handicap and running Grade 1-placed.

Pride of place within the North American string, however, still belongs to his homebred Wild Spirit, a Chilean-born daughter of Hussonet.

Wild Spirit swept three of Chile’s biggest races - the Mil Guineas, Gran Criterium and Alberto Solari Magnasco - before heading to the US, where she annexed the 2003 Grade 1 Ruffian Handicap and was placed in the Grade 1 Personal Ensign Handicap and Apple Blossom Handicap in three starts for Bobby Frankel. She has since bred two stakes horses for Aboughazale and is the granddam of Protonico.

Protonico came close to landing a Grade 1 himself when a narrow second to Hoppertunity in the 2014 Clark Handicap. A tough competitor whose seven victories included the Grade 2 Alysheba Stakes and a trio of Grade 3 events, Protonico spent the majority of his career with Todd Pletcher but was also trained for a time by Aboughazale, who saddled him to win his debut, a Delaware Park maiden, by 12-and-three-quarter lengths. Aboughazale also trained Wild Spirit’s daughter, Diva Spirit, to win the Listed Polly’s Jet Stakes at Delaware Park in 2013.

Currently, the string is handled predominantly by Pletcher with several under the care of Ron McAnally in California. Pletcher has two exciting three-year-olds for 2017 in his barn in recent Gulfstream Park debut winners Malagacy and Ghalia; Malagacy, a Shackleford colt bought as a two-year-old, turned heads when romping home by 15 lengths ,while Ghalia, a well-connected daughter of Medaglia D’Oro bought for $600,000 as a yearling, was the near seven-length winner of her race.

Outside America, a string is also being developed in Australia, where his homebred Weatherly won the Listed Talindert Stakes for Paul Messara last February. Sadly he broke down fatally at Canterbury on New Year’s Eve.

Several yearlings, however, are waiting in the wings in Australia, while racing in Europe has not been ruled out should the right horse be identified. But for now the focus is very much on Sumaya Farm and the burgeoning stud career of Protonico.

Sumaya has a rich and varied past having operated as Crystal Springs Farm when under the ownership of RD ‘Dee’ and Joan Hubbard, co-breeders of Stravinsky among others, and then as Belvedere Farm when it passed to Marty Takacs.

“The quality of the land is very good,” says Relihan. “Jody Alexander [former manager of Mt Brilliant Farm] will oversee the day-to-day management.

“The maiden and barren mares are already there and then some of the purchases from January went over. But we have plenty of renovations going on - we’re revamping the foaling barn and updating the fencing. Hopefully by April, everything will have been transitioned over. The farm is set up for about 30 to 35 mares so it will be a fairly boutique operation.

“Mr Aboughazale still wants to continue racing but he’s not opposed to taking several to the sales as well. And as more and more fillies are retired several might go to Chile. It might be that some work better in the Chilean programme.”

The purchases made in January ranged from the $700,000 paid for Grade 3 Monmouth Oaks winner Delightful Joy, by Tapit, to $15,000 paid for Graded stakes producer An Annika Moment. Delightful Joy and Joyfully, a well-connected Mineshaft mare in foal to American Pharoah who cost $575,000, are slated to visit War Front, in whom Aboughazale owns half of a share. However, the majority were bought to support Protonico.

“Mr Aboughazale understands the stallion business and understands that it can be very tough,” said Relihan. “But Protonico showed great heart and came very close to winning a Grade 1. He stands for $6,500 so the idea is to give him every opportunity.

“When I sat down with him to mark down the matings, he was very aware of the physicals; what would work with what. We’re trying to fit as many parts of the puzzle that we can.

“There’s a lot of [damsire] A.P. Indy in Protonico. He’s a refined but compact and strong horse so we were looking for mares with range and substance. We bought some older, proven mares that we thought would suit and then some maidens who showed ability, some with two-year-old form.”

Kentucky has benefitted greatly from international investment in recent years and, in Aboughazale, it has attracted a player with a long term view aided by a deep understanding. The scene is set for him to maintain another productive connection to the sport.