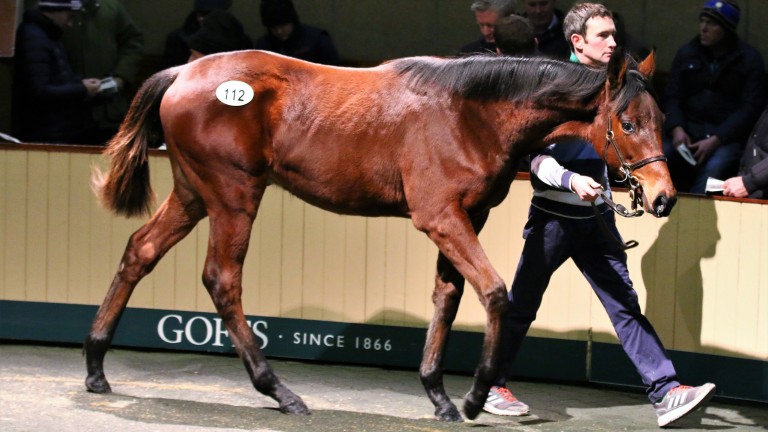 The session-topping son of Walk In The Park parades around the Goffs sales ring
Goffs
1 of 1
By Lewis Lesbirel 8:26PM, DEC 12 2018

The progeny of Grange Stud stallion Walk In The Park proved popular once again during Wednesday's opening session of the Goffs December National Hunt Sale, a colt by the sire having topped the corresponding session 12 months ago.

Ballincurrig House Stud consigned that colt and returned with another of the stallion's sons this time around to realise a record price for a National Hunt foal at Goffs, with Patrick McCann going to €90,000 to secure lot 112.

The colt is a half-brother to high class chase winners Minella Foru, Penny Jane and Sumkindofking, his page having been in receipt of a timely update courtesy of the latter’s gallant performance behind Present Man in the Listed Badger Ales Trophy last month.

A new top lot and a record price for a NH foal at Goffs, as Lot 112, a @grangestud Walk In The Park colt, 1/2 brother to G2 chase winners Minella Foru & Penny Jane, sells to Patrick McCann for €90,000. Consigned by Ballincurrig House Stud pic.twitter.com/nJqkXgeGK1

“I think it’s no coincidence that Walk In The Park is as popular as he is because they are lovely individuals, and he’s probably covered some of the best mares in the British Isles over the last couple of years,” said Ballincurrig supremo Michael Moore.

“The other big advantage with Walk In The Parks is that they’ve got size and scope and a lot of buyers are recognising that."

McCann said the plan for Monday's session topper, along with a number of recent foal purchases from this and other sales, will be to offer the horses for sale again as three-year-old stores.

"The best foals are making the best three-year-olds when it comes to the sales, and if you want the best foals you’ve got to pay the price for them. That’s the game plan," he said.

“I have to say it’s working with people whose opinion you trust also. I have a relationship with Ballincurrig House and Mike Moore that goes back a few years now. They consign all the horses and they do a fantastic job, you know exactly what you’re going to have at the sales and it’s a team effort.

“We bought another one earlier today, lot 74, out of a half-sister to Denman, who’s a very nice foal also.”

Walk In The Park's profile has been boosted significantly by some of the biggest names in jumping in recent years, most famously the Willie Mullins-trained powerhouses Douvan and Min.

Moore added: “People are of the view that there will be another Douvan or Min appear from somewhere and one would imagine at the moment that Walk In The Park is the most exciting sire about.”

Fresh from seeing another of his sons, Walk In The Mill, land the Becher Chase over the National fences on Saturday, Walk In The Park was also responsible for the second most expensive foal on the day as Richard Frisby went to €68,000 to secure another Ballincurrig-consigned colt.

“He is a lovely foal, a fantastic walker and has a great pedigree,” Moore said of the half-brother to Grade 1-winning chaser Monalee.
“Dick Frisby is a very shrewd pinhooker who, when he decides he likes them, doesn’t normally get beat.

The December Sale could get even better for Ballincurrig during Thursday’s session, with the County Cork outfit set to offer a Mount Nelson colt out of dual Grade 1-winning hurdler Glens Melody whom Moore believes “should be on everyone’s lists”.

Thursday's second and final session begins at 10am.

FIRST PUBLISHED 8:26PM, DEC 12 2018
The best foals are making the best three-year-olds when it comes to the sales, and if you want the best foals you?ve got to pay the price for them