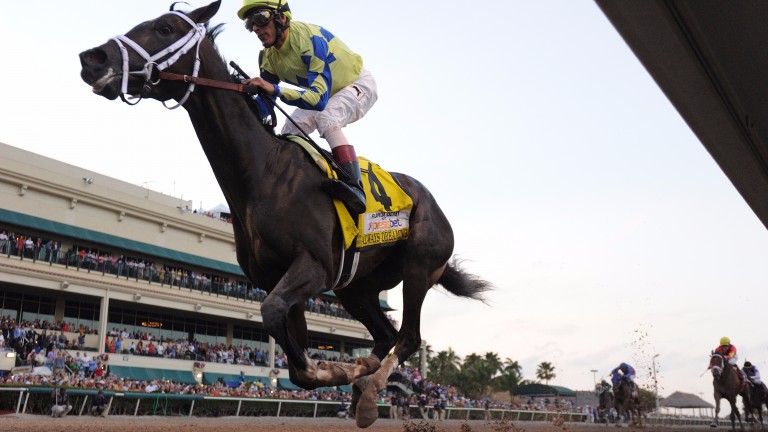 Always Dreaming: can he last home where his sire Bodemeister ran out of gas in the Kentucky Derby?
Coglianese Photo/Gulfstream Park
1 of 1
6:51PM, MAY 5 2017

It is not just about the F word. Yes, for one of the great European racehorses of the modern era to present two cadets from his first crop in a Classic field of just ten can only consolidate the exciting impression that his brilliance may be heritable. And, yes, already this spring we have learned a good deal more about Frankel’s potential. As is so reliably the case of his own sire, his sophomores are training on with gusto - and they are also promising, again like Galileo, to be effective at different trips.

In fact, his sons in the Qipco 2,000 Guineas show two different sides of the Frankel coin. Whereas Eminent is one of several to appear eligible for longer distances, Dream Castle has sooner evoked the way their sire initially went careering along a perilous margin of his zest. Perhaps Dream Castle can also become more tractable, with time - but whether a hood can give overnight professionalism to such a raw colt, whose education has been so compressed, is another matter.

The breathless interval to the big day has doubtless heightened the disdain of many modern trainers for the traditional British trials. Certainly it could yet prove inimical to horses on such a narrow base of development as Eminent, Dream Castle and Barney Roy. Nonetheless it is a long time since the task of a short-priced winter favourite has been made to seem so much harder during the spring.

Ten or 12 extra days’ recuperation is among many things in favour of the one colt with the potential to surpass - and wildly surpass, for those of us immersed in a longer perspective on the breed - the significance even of a Classic coronation for Frankel. For if Al Wukair can earn a place at stud, he could bring something extremely precious to the gene pool.

His sire Dream Ahead is one of the few remaining hopes for a sire-line extending - via respective giants of the 20th and 19th Centuries, in Man O’ War and West Australian - to one of two founders of the breed whose “male tail” influence has been all but eradicated by the third, the Darley Arabian.

Al Wukair traces to the Godolphin Arabian. The other sire-line to have been inundated by the Darley Arabian, today the root sire for 19 out of 20 thoroughbreds, extends to the Byerley Turk - and lost a potential saviour when it was decided to castrate Even Top’s son Cirrus Des Aigles.

It was Cirrus Des Aigles, of course, who pushed Frankel so hard on his final start. Some of us, while acknowledging the poignant circumstances compounding the prejudices of his trainer, would rather have seen Frankel - who never spent a night away from Warren Place - finish on a more adventurous note. The way some of his sons are shaping, perhaps he might have seen out the trip in the Arc; while a personal fantasy was always to see him in the Breeders’ Cup Classic.

As it is, we are indebted to Sheikh Mohammed for trying to stem a lamentable retrenchment, over the past few years, in the schism dividing the racing and breeding cultures either side of the Atlantic. His belief that even a Kentucky Derby winner does not need a genetic and environmental grounding - in the dirt, the whole dirt, and nothing but the dirt - has appeared to lie dormant for a few years. But he is back with the handsome son of Helmet, Thunder Snow, who has a copper-bottomed turf pedigree but adapted courageously to a different surface in Dubai.

He did not look totally at home that day, it must be said, switching leads like a temperamental director and hanging; and he could find himself chewing on plenty of kickback from his draw. Nonetheless some Americans have been so confused by the trials that they are prepared to embrace Thunder Snow as a convenient means of throwing out the rest.

The possibility of a slop, meanwhile, represents just one more late curveball. But it’s a race full of intriguing animals - and people - and contains a couple of reminders that you-know-who is not the only sire trying to hit the ball out of the park with his first three-year-olds.

Certainly it would be sweet to see a son of Bodemeister hold out in the race where he blew a lead of three lengths at the eighth pole. Unfortunately Always Dreaming seems to have become increasingly aggressive in his works, so maybe his fuel gauge will also run low in the stretch. Head as well as heart reckons the $16,000 son of Dialed In, Gunnevera, is overpriced - and likewise J Boys Echo. A son of Dialed In’s sire, Mineshaft, he had a rough trip in what seems to have been a weird race for the Blue Grass. The F words to remember, to that extent, could instead be forgive and forget.

FIRST PUBLISHED 6:51PM, MAY 5 2017
If Al Wukair can earn a place at stud, he could bring something extremely precious to the gene pool