$485,000 Bellavais on top during strong opener of Horses of All Ages Sale 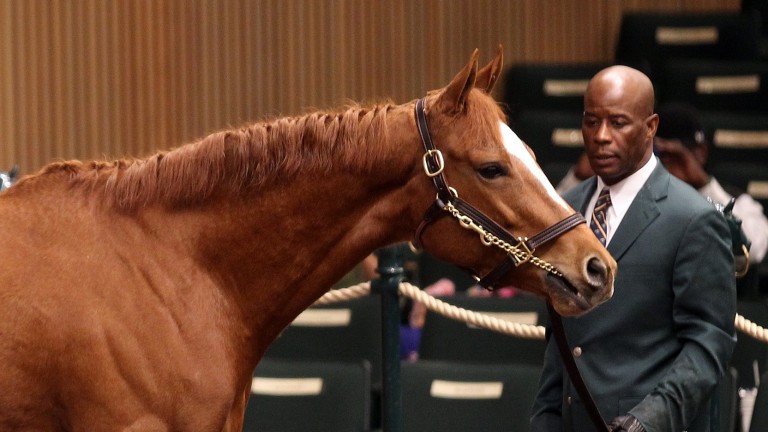 Keeneland realised double-digit growth in gross, average, and median prices during Monday's opening session of the 2018 January Horses of All Ages Sale, which was highlighted by the $485,000 purchase by agent Steve Young of Bellavais, a stakes-winning daughter of Tapit from a successful female family developed and raced by Darby Dan Farm.

Young said he purchased Bellavais for an undisclosed client and that she would resume training with Todd Pletcher for her four-year-old season.

"We started the sale week off very well," said Geoffrey Russell, Keeneland's director of sales operations. "The gross, average, and median are all up, so there's a positive start to the sale. It was a good, consistent market all the way through today. (Short yearlings) were at a premium.

"January's always been a good spot to buy a racehorse, and today Steve Young found one in Bellavais. When these rare pedigrees are offered, they command premium prices."

Bellavais to race on as a four-year-old

Consigned by Darby Dan Farm, agent, as a racing or broodmare prospect, Bellavais is out of Grade 3 winner La Cloche, by Ghostzapper. La Cloche is out of multiple Grade 1 winner Memories of Silver and is a half-sister to Grade 1 scorerer Winter Memories, both campaigned by the Phillips family of Darby Dan.

Bellavais' three-year-old half sister Tap Fever, by Tapit , scored her first victory on Sunday at Golden Gate Fields for owners Don Alberto Stable, Mark DeDomenico, and Edward D. Taylor. Another member of the family, Hawkish, a three-year-old Artie Schiller gelding, was an impressive winner of his career debut on Saturday at Gulfstream Park for AJ Suited Racing Stable.

"It is kind of sad (to sell Bellavais), but we are bound by business disciplines," Darby Dan owner John Phillips said. "We have several in this family, and we are going to keep that family going. I'll never sell a gold mine, but every now and then I will sell a little gold because we have to.

"The price was very good," he added. "She's small but very correct, and has a great heart and is very competitive. If you look into the pedigree, you will find that some of the smaller fillies have produced really well. I regret that I had to sell her, but someone else will do very well with her."

"She's from a family that you have to have a world of respect for - the Darby Dan mares," Young said. "And there's such an infrastructure of other horses in that pedigree that are doing well. I thought she would be a good gamble to go ahead and run as a four-year-old. A lot of that family gets a little better as they get older. She's a multi-surface stakes horse, and I think she was an obvious pick."

Monday's top-selling yearling was a $400,000 colt from the first crop of Triple Crown winner American Pharoah. Consigned as Hip 303 by Pope McLean (Crestwood Farm), the son of the winning French Deputy mare Air France is a half-brother to Grade 2 winners Smooth Air and Overdriven. He was purchased by Robbie Harris for Alex and JoAnn Lieblong. Three years ago, McLean sold the colt's half-sister, All Laced Up, to the Lieblongs for $450,000 at Keeneland's 2015 September yearling sale.

Earlier in the sale, Bluegrass Thoroughbred Services, agent, paid $375,000 for Stradivarius, a half-sister to Grade 1 winner Eskendereya and English Group 1 winner Balmont, carrying her first foal by leading sire Medaglia D'Oro . The five-year-old daughter of Street Cry, consigned by Denali Stud, agent for Earle Mack, is out of the winning Seattle Slew mare Aldebaran Light and from the family of Kentucky Derby winner Cannonade.

"She ran very fast when she broke her maiden, and (I like that) she is in foal to Medaglia D'Oro," John Stuart of Bluegrass Thoroughbred Services said. Stuart reported Stradivarius might be bred back to Medaglia D'Oro or sent to his son Violence.

Shadai Farm active in the market

Shadai Farm of Japan acquired two of the day's top-priced horses, paying $350,000 for Majestic Quality, a multiple graded stakes-placed daughter of Quality Road, and $300,000 for two-time Indiana Horse of the Year and Grade 2 winner Lady Fog Horn. ELiTE consigned both horses as racing or broodmare prospects along with $65,000 Discovery Bay, and ended the day as the leading consignor by average ($238,333).

Also bringing $350,000 during the opening session was Charm City Girl, a seven-year-old daughter of Pioneerof the Nile in foal to Union Rags. Consigned by Upson Downs Farm, agent, she was purchased by Larkin Armstrong, agent. Charm City Girl is out of the Storm Cat mare Charming Toutsie, a daughter of multiple Grade 1 winner Tout Charmant.

"She checked all the boxes for us for the Town & Country breeding program," said Shannon Potter, president of the operation. "Hopefully she will make a nice addition to our broodmare band. We came to this sale not wanting to buy, but this mare was my favorite in the sale and we ended up with her. The price was probably a little more than we wanted to pay, but the market is strong for a good, young mare."

Potter said Motown Lady will be bred this season, but no decision has been made about a mate.

Happy Mesa's breeding plans yet to be decided

Another whose breeding plans will be determined in the future is multiple stakes winner Happy Mesa, purchased by Winchell Thoroughbreds for $300,000. The four-year-old daughter of Sky Mesa, consigned as a racing or broodmare prospect by Bluewater Sales, agent, is out of the winning Broken Vow mare Happy Choice.

"We thought she'd be about $300,000," Winchell racing manager and farm manager David Fiske said. "She could run and she was a very pretty mare. We'll figure out (plans for her) later. We've got several stallions we could send her to, so we'll see what we decide. No decision has been made."

Taylor Made Sales Agency was the session's leading consignor by gross, selling 31 horses for $2,786,500.

"I think (the market) is really good," said Mark Taylor, Taylor Made's vice president of marketing and public sales operations. "It's still early, but watching other peoples' horses and our horses sell, anything that's got any quality to it is hard to buy."

Exciting round of covers for Meon Valley Stud broodmares