$1.9m buyback is a pearl beyond price 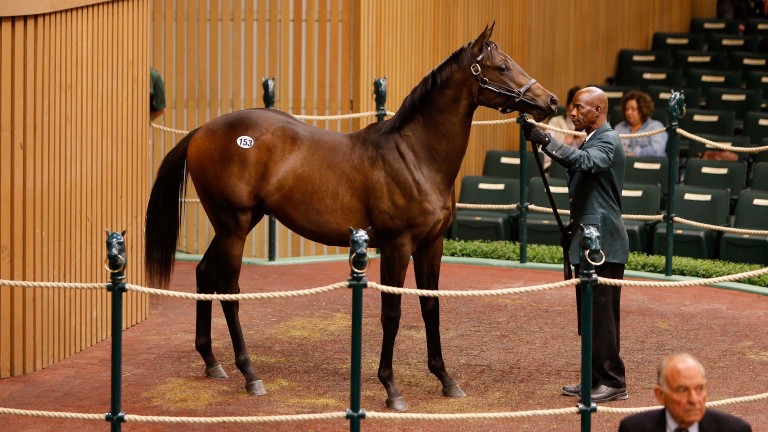 It takes a special kind of resolve to walk impassively away from a seven-figure profit.

With a steady smile and a confident stride, however, Arif Kurtel did just that on Monday evening – departing the Keeneland sale pavilion after deciding he would rather retain a full brother to 2014 American juvenile champion Shared Belief, rather than sell him.

When the auctioneer's hammer fell, the colt was led out of the ring with the board showing $1.9 million, but Kurtel – a Turkish owner and breeder with over 700 thoroughbred and Arabian horses spread between his homeland, Europe and the United States – showed no remorse even over a bid from a potential buyer at $1.7 million.

"He has quality, he has everything," said Kurtel of the bay son of Candy Ride out of Common Hope, by Storm Cat. "Who knows his destiny? But I really wanted to race him."

The colt was the highest-priced RNA of the elite Book 1 session, although his failure to sell at that level was not unprecedented. In 2016, a War Front colt bred by Mandy Pope's Whisper Hill Farm from 2011 Horse of the Year Havre De Grace was a $1.9 million buyback after an inadvertent mistake on his reserve price.

Kurtel said he wanted to see how high the bidding would go on his Candy Ride colt, consigned through Vinery Sales, but did not reveal at what level he would have been willing to sell.

"It's my dream to race champions," Kurtel said, adding that the colt would stay in the US to race. "Everybody is chasing dreams in this business."

A coal-mining businessman, from the family that runs the Mozaik wine business in Turkey and who has also served as a director of UK-based Chelsea Yachting Ltd, Kurtel said he lives in Istanbul but also has Canadian citizenship. He keeps mares in Turkey, Ireland, France and the US, where this year he bred two foals by leading American sire Tapit: Common Hope produced a filly in April, while Lady Candy delivered a colt in February.

Lady Candy is an unraced, five-year-old full sister to Shared Belief and this yearling colt. Kurtel bred her in Turkey after buying Common Hope, carrying the filly in utero, for $125,000 at Keeneland in 2011.

Kurtel also bred two half-sisters to Shared Belief who have not raced to date. A three-year-old filly by Henrythenavigator, bred in Turkey, is named Belief in Me; while a two-year-old by Victory Gallop (named Believe In Victory) was conceived in Turkey but born in Kentucky.
In addition Kurtel owns No Dress Code, a $110,000 purchase whose daughter Reneesgotzip was a multiple Graded winner and twice placed in Breeders' Cup races prior to her sale in 2015, in foal to Medaglia d'Oro, to Shadai Farm for $1 million.

No Dress Code produced Seventh Sense, a City Zip full brother to Reneesgotzip, for Kurtel in Turkey. That colt, carrying his colours, won a maiden race at Santa Anita while conditioned by Jerry Hollendorfer; and also won a race at Churchill Downs in June for Turkish-born trainer Murat Sancal, who oversees Kurtel's mares in Kentucky. No Dress Code foaled a full sister to Seventh Sense and Reneesgotzip in 2016.

Kurtel, who also has been a top breeder of purebred Arabian racehorses, has not yet decided who will receive the yearling he elected not to sell on Monday. Sancal, alongside in the pavilion, indicated that the owner's young horses typically are given early training by Bryan Rice in Florida.

"After pre-training, we'll see how it goes," Kurtel said. "He needs some time to mature. He has good conformation and he will get stronger."

FIRST PUBLISHED 11:35AM, SEP 12 2017
It's my dream to race champions. Everybody is chasing dreams in this business