Martin Stevens pinpoints the sires, mares and figures who could hit the headlines this year 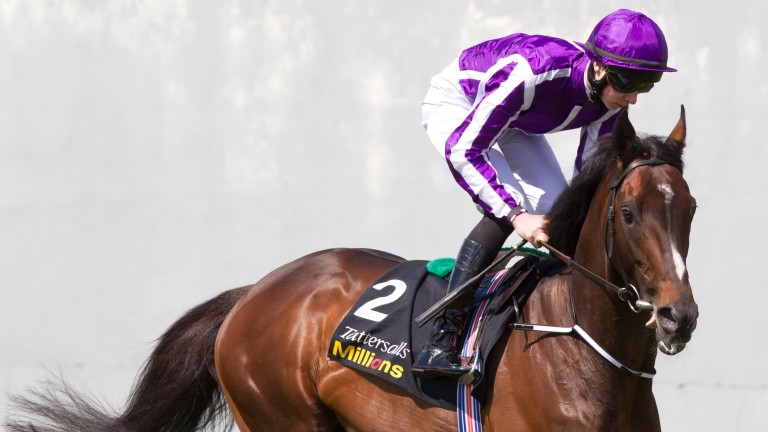 1. Superstar sophomore sire
Frankel suggested he could be as exciting a sire as he was a racehorse with a bold show from his first two-year-old runners, who included 18 winners, a third of them Pattern scorers and several unexposed talents who won maidens such as Atty Persse, Cracksman and Mirage Dancer.

The dual world champion cannot rest on his laurels, as he must now prove his progeny will be as effective at three. It seems inconceivable though that some of those juvenile talents won’t go on to greater things, and there are plenty of well-bred horses who have not yet been unleashed.

2. War Front point to prove
It will be a crunch year for War Front as the Kentucky stallion, who has covered some of the very best Sadler’s Wells-line mares from Europe in recent years, has had his record with three-year-olds questioned after top juveniles such as Air Force Blue, Faydhan, Hit It A Bomb, Peace And War and War Command appeared not to train on.

3. Iffraaj in ascendancy
The Dalham Hall Stud resident is a sire who should make a big impact with his two-year-olds in the next 12 months, having covered an improved book of mares in 2014, the year after his daughters Chriselliam and Rizeena struck in juvenile Group 1 races and son Hot Streak finished second in one.

Among the well-bred progeny of Iffraaj who turned two today are Hazel Bay, a half-sister to Creachadoir and Youmzain; Scooter, a half-brother to Halfway To Heaven out of Cassandra Go with Roger Charlton; and an unnamed half-brother to Foundation with Saeed Bin Suroor.

4. In the court of Camelot
Coolmore’s triple Classic hero is one of the most keenly anticipated first-season sires of 2017 with a large, well-bred crop that was popular in the sales ring last autumn set to represent him. Most Montjeu offspring and grandchildren were slower to mature but Camelot made a winning debut in the July of his juvenile season and he had the speed to win the 2,000 Guineas, so expect to see his progeny flower from summer onwards.

A half-brother to Group 1 winners Listen and Sequoyah with Martyn Meade and a three-parts brother to Joshua Tree with Mark Johnston catch the eye, while Joseph O’Brien, who rode Camelot to all his six victories, has at least three in his care.

5. Al Kazeem’s depleted team
Another freshman sire whose first runners will be looked forward to, but which we will see a lot fewer of, is Al Kazeem, whose first covering season at the Royal Studs in 2013 was curtailed when he was found to be subfertile.

The son of Dubawi – who won the Tattersalls Gold Cup for the second time when returned to the track before restarting his stallion career at Oakgrove Stud – has just 23 two-year-olds to bat for him but he received an early endorsement with seven of his yearlings selling for an average of around £135,000 in the autumn.

6. First foals for Pharoah
There will be lots of excitement to see how the debut foals by American Pharoah, the first Triple Crown winner since 1978 and a Breeders’ Cup Classic hero to boot, turn out when they start arriving in the next week or so.

The son of Pioneerof The Nile covered a glittering book of 208 mares at Ashford Stud in Kentucky last year, 26 per cent of whom were winners, or dam of winners, of Group/Grade 1 races. Mares of European interest included Cherry Hinton, Imagine, Maybe and Ridasiyna, plus the dams of Chachamaidee and Shareta.

7. Kingman yearlings to rule the ring
The champion miler of 2014, a son of sire of sires Invincible Spirit out of a Classic-winning half-sister to Oasis Dream, seems to have a groundswell of support from top breeders behind him and in his first year at stud he covered top-class mares such as Passage Of Time, Pride and Taghrooda and the dams of Al Kazeem, Frankel, Legatissimo, Power and Workforce.

His first crop are now yearlings and judging by the performance of his first foals in the ring – six sold for an average of around £150,000 – the ones who come on the market should be very popular at the autumn sales.

8. Shalaa has a big shout
Another young sire son of Invincible Spirit who breeders can be expected to throw their weight behind is Prix Morny and Middle Park Stakes hero Shalaa, the most expensive new recruit to the stallion ranks in Europe this year with a €27,500 fee at Haras de Bouquetot in Normandy.

Owner Al Shaqab Racing is giving Shalaa strong support by sending him dual Prix de l’Arc de Triomphe heroine Treve and Twyla Tharp, the dam of The Fugue, among other black-type mares, and the stallion is fully booked.

9. Gold for Goldikova?
The first two foals out of the Wertheimer brothers’ record-breaking 14-time Group/Grade 1 winner Goldikova – the now three-year-old filly Terrakova and four-year-old colt Goldikovic, both by Galileo – made their debuts in November and while Terrakova lived up to her genes by winning by a clear margin on the Chantilly all-weather and is set to be given a Classic preparation by trainer Freddy Head, Goldikovic was well beaten but not disgraced at Deauville.

Look out also for Galikeo, the first foal out of Goldikova’s Group 1-winning half-sister Galikova by Dansili, a short-head second on his debut for Head and the Wertheimers at Deauville, also in November.

10. Another helping of Caviar
Remember the name Oscietra. The Exceed And Excel filly who is the first foal out of legendary Australian sprinting mare Black Caviar impressed onlookers by winning a Flemington barrier trial last month, breaking sharply and showing plenty of dash to gallop clear of four unraced rivals.

The David Hayes-trained filly was expected to make her proper debut back at Flemington on Sunday, over five furlongs – the same course and distance where Black Caviar launched her career in April 2009.

11. Dubawi dazzlers
Godolphin chief executive John Ferguson went to great lengths at the sales last autumn to ensure the best Dubawi yearlings would be carrying the royal blue silks in 2017 and beyond, so it will be fascinating to follow their progress.

Ferguson signed for four Dubawi yearlings who cost seven figures, including the joint-most expensive in Europe, a colt out of Coronation Stakes heroine Fallen For You at 2,600,000gns. There was also the 2,100,000gns colt out of Listed scorer Nature Spirits, the 1,200,000gns colt out of Grade 2 winner Giants Play and the €1.4 million colt out of Poule d’Essai des Pouliches heroine Beauty Parlour.

12. Hveger in the headlines
Hveger was recently crowned our broodmare of the year after being represented by globetrotting Group 1 hero Highland Reel and Great Voltigeur Stakes winner and Irish Derby second Idaho last year. Both could continue to mix it in the big races in 2017.

The Australian-bred daughter of Danehill has been mated with Galileo in every year since arriving in Ireland and the next off the production line are an as-yet unraced three-year-old filly called Cercle De La Vie trained by Andre Fabre for Mayfair Speculators and a two-year-old filly bought by Hubie de Burgh and James Harron for a southern-hemisphere client for 625,000gns at Tattersalls in October, who is set to be trained in Europe.

13. Big hopes for Hascombe
Anthony Oppenheimer will be looking forward to welcoming first foals by his brilliant colt Golden Horn in the coming weeks and, just a year after the son of Cape Cross was retired, other products of his Hascombe and Valiant Studs could be hitting the headlines.

One of the most exciting of Frankel’s back-end maiden winners, Cracksman, carried Oppenheimer’s famous black and white silks to victory on his sole start at Newmarket, while St Leger hero Harbour Law and King Edward VII Stakes winner Across The Stars, both bred and sold by Hascombe and Valiant, could bag more big races.

14. Sun set to shine
Chances are at the start of 2016 you would not have heard of Sun Stud, but 12 months later it ranks as one of the most upwardly mobile operations.

Hong Kong-owned and Australian-based, Sun Stud – formerly known as Eliza Park International – has grand international ambitions and has achieved much already. It owns impressive Prix Jean-Luc Lagardere winner National Defense and its bloodstock portfolio includes the dam of US Grade 1-winning two-year-old Klimt, while it developed into a major player at the sales, buying 11 six-figure yearlings in Europe in the autumn and making a play for many of the big-money lots at Book 1.

15. Al Naboodah a new name
Another new owner that has gone from nought to sixty in a short space of time is Abdullah Saeed Al Naboodah, who enjoyed a commendable nine winners from 17 runners on the Flat in Britain in 2016 including Ardad, who scored at Royal Ascot and in the Flying Childers Stakes, Nathra, who won the Nell Gwyn Stakes and finished second in the Poule d’Essai des Pouliches, Prix Marcel Boussac third Dabyah and Listed scorer Rodaini.

Although scarcely any horses were signed for in his name at the sales last year, it would be no surprise to see some expensive purchases eventually race for Al Naboodah.

16. Young vendor to follow
Amy Marnane certainly has the pedigree to excel as a consignor, as a daughter of breeze-up legend Con. She showed she had inherited her father’s expertise in her first forays with her own drafts to the sales last year.

Among her consignment at the Tattersalls December Foal Sale was a Frankel colt sold on behalf of Zalim Bifov to John Ferguson for 280,000gns – an auspicious start for a vendor who wants to concentrate on foals and yearlings but bought a few yearlings at Keeneland to breeze on the side.

17. Agency on the up
Howson and Houldsworth Bloodstock, the partnership of sales veteran Geoffrey Howson and apprentice Matt Houldsworth, enjoyed a good 12 months that could spill into 2017.

The pair signed for dual Group 1-winning sprinter Quiet Reflection as a yearling – she could collect more laurels – and kept exclusive company at Book 1 of the Tattersalls October Yearling Sale by bidding for several of the top lots and eventually managing to buy a Dubawi colt from the family of Diamond Green for 500,000gns on behalf of Tony Wechsler and Ann Plummer. The pricey purchase has been sent to Charlie Hills and named Moon Of Baroda.

FIRST PUBLISHED 12:02PM, JAN 2 2017
Chances are at the start of 2016 you would not have heard of Sun Stud, but 12 months later it ranks as one of the most upwardly mobile operations